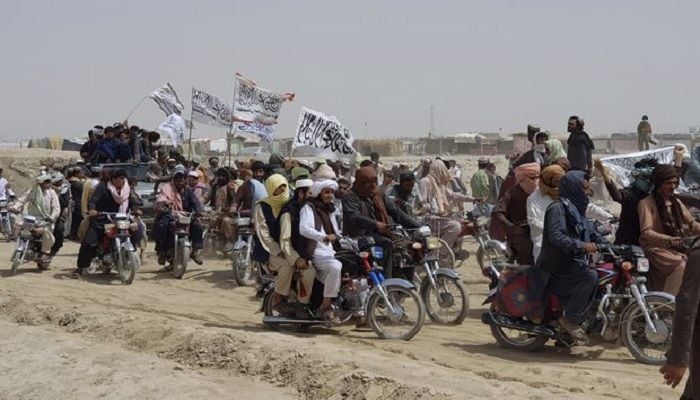 Supporters of the Taliban carry their signature white flags after the Taliban said they seized the Afghan border town of Spin Boldaka across from the town of Chaman, Pakistan on July 14, 2021. (Photo: THE GLOBE AND MAIL)

﻿US President Joe Biden said he was ending the “forever war in Afghanistan” when he announced US forces would leave the country this summer. Almost immediately, the Taliban went on a vicious spree: taking districts, banning women from work, attacking girls’ schools and reportedly forcing unmarried women to wed Taliban fighters.

These terrorist foot soldiers are merely the latest recruits, fresh cannon fodder, for Pakistan’s forever war in Afghanistan, which started with General Muhammad Zia-ul-Haq’s coup in 1977 and isn’t ending now. With US and Saudi support, Zia fought the Soviet occupation. His successors set up al-Qaeda at Peshawar in 1988 as a recruiting sergeant and piggy bank for terrorists.

Even after the attacks on Sept. 11, Pakistan’s military sheltered Osama bin Laden, while relaunching the Taliban as a fighting force.

Since 2001, Pakistan’s proxy war has killed at least 120,000 Afghans and 3,500 US and allied soldiers. They have ignored the UN sanctions on al-Qaeda and the Taliban, while remaining (along with Iran) the world’s leading state sponsor of terrorism. While publicly espousing peace and arguing “no military solution was possible in Afghanistan,” Pakistan has covertly marshalled proxy forces for the all-out offensive now under way. In other words, Pakistan has abused the trust of the whole world.

So far, Mr. Biden has put off any reckoning with Pakistan, which he knows to be a crucial arena in the contest between democracy and authoritarianism. A decade ago, failure to enforce “red lines” or prevent genocide in Syria emboldened Russian President Vladimir Putin to occupy eastern regions of Ukraine – a country whose independence and identity he now seeks to erase.

Ukraine and Afghanistan – two countries facing invasion by larger neighbours with imperial delusions – may decide the future of democracy today. General Zia-ul-Haq’s successor as Pakistan’s Chief of the Army Staff, General Javed Qamar Bajwa, is still obsessed with “strategic depth” – proxy war in Afghanistan leading to influence in Central Asia to assuage the loss of East Pakistan (now Bangladesh) in 1971.

And so, with the American withdrawal, Afghanistan appears poised to face this “endless war” alone. But for a number of reasons, General Bajwa is unlikely to succeed. First, to wreck Syria, Mr. Putin only had to prop up Mr. Assad – to conquer Afghanistan, Pakistan’s protégés have to go through 33 Taliban-loathing provincial capitals, plus Kabul.

Second, with the Taliban still a sanctioned terrorist entity and Pakistan already committing an “act of aggression” under Chapter VII of the UN Charter, the machinery of international law and international peace and security can swing quickly into action against them.

Third, the strongest voices opposing this new round of proxy war are in Pakistan itself. They include member of the National Assembly Mohsin Dawar, respected elder statesmen Afrasiab Khattak and Farhatullah Babar, and Pashtun Tahafuz (Protection) Movement leader Manzoor Pashteen.

Fourth, as the Afghanistan issue is reframed in terms of Pakistan’s proxy war, it will be up to democracies to break the logjam in the peace process, especially with its “Troika Plus” (China, Iran, Pakistan and Russia) compromised by genocide, proxy wars and invasion.

Fifth, after 20 years of co-operation under UN, NATO and development umbrellas, the world is unlikely to turn its back on Afghanistan.

The only way to stop the assassination squads – all operatives of Pakistan’s Inter-Services Intelligence (ISI) – now terrorizing Afghan civilians, or to save villages from further brutal violence, is concerted international diplomatic and political action to shut down Pakistan’s proxy war. We need to take the same firm action now that leading democracies took after Ukraine was invaded seven years ago.

Russia’s Putin and Pakistan’s Bajwa are neocolonial bullies with post-Cold War hangovers and irredentist agendas. The heart of Asia deserves principled diplomacy to stop them just as much as the heart of Europe does.

Mr. Biden’s personal pique – he has been opposed to the Afghan mission for over a decade – need not define the world’s deeper commitment to peace and justice in Afghanistan, leaving ample scope for statesmanship.

As a charter member of the UN and NATO that has known invasion by neighbours, a champion of international law with a feminist foreign policy, and one of Afghanistan’s leading partners for two decades, Canada should take the diplomatic lead. Afghans must be spared another generation of violence, obscurantism and death.

This article was published in THE GLOBE AND MAIL. Chris Alexander, the author of the article, was Canada’s ambassador to Afghanistan, the UN deputy special representative of the secretary-general for Afghanistan, Canada’s Minister of Citizenship and Immigration.