A Tribute to Musa Bhai 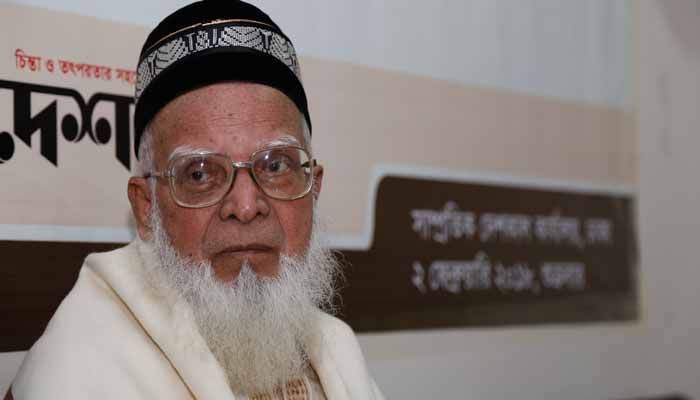 ﻿﻿﻿﻿The year 2020 was a great tragedy for the people of Bangladesh. We have lost a lot of people in this one-year interval. This death march was quite long throughout the year. Most importantly, many of those who left because of the Coronavirus pandemic could not be properly dismissed. Musa Bhai of Jhenaidah was a bit lucky with that. He did not have to die of that virus. Due to this, there was a huge presence at his Janaza in Jhenaidah. Roads and fields of the adjacent area were thronged by the people. And it was because of his deep connection with the joys and sorrows, struggles, and movements of the people of the Jhenaidah region during his long ninety-nine years of life.

Towards the end of his life, the people of Jhenaidah saw him as their guardian. And that is why people from all walks of life attended his Janaza. However, he lived in Dhaka with his son's family in the last days of his life. However, in every Eid, all his boys and girls used to gather at his Jhenaidah's residence. And in that family reunion fair, he used to be the crown jewel.

Musa Bhai was lucky, his sons are all established. The eldest son Shahriar has been playing a leading role in the pharmaceutical industry of the country as the chairman of Radiant Group. Other boys are also involved in various businesses at home and abroad. Although he was an advisor to the boys in this business, he mainly did the social work. He Founded Zahedee Foundation. And with the initiative of this foundation, he had left a huge contribution in the field of education and culture of Jhenaidah and Jashore. He also set up autistic schools, especially for boys and girls with special needs, which was rare as an example.

However, Musa Bhai's main field of work was politics. During his student life, he joined the language movement and from there in the first period of the Pakistani era, he joined the opposition political party Awami Muslim League and later Awami League. He served as the general secretary of this organization for a long time. Later, when Maulana Bhashani formed NAP, he also took charge of NAP. As the leader of the NAP, not only was his involvement in every movement against the Ayub regime in the sixties, but his leadership also played an important role for others. And when Maulana Bhashani came to Jhenaidah as the leader of this NAP, he used to go to his house.

My identity as an activist of the student movement during the struggling period of that Pakistan period with Musa Bhai. When I came to Jhenaidah to organize a student union, I met him directly, which later became close through various struggles-movements and organization-building activities. In fact, the student union in Jhenaidah became a single organization with the help and support of Musa Bhai. Later, during the Bangladesh period, as the publicity secretary of Bhashani NAP, got his main help in reorganizing NAP in the Jhenaidah district. During this period Jashore-Jhenaidah region was under the influence of all secret organizations. He has firmly taken the organization forward by handling all sides in that situation.

When my political relations with the NAP were severed after '74, my contact with Musa Bhai decreased a lot. But whenever I went to Jhenaidah, I visited his house.

Musa Bhai passed away in old age; but his departure has created a huge vacuum in all areas, including Jhenaidah. However, the work he has set up, as well as the initiatives he has launched through the Zahedee Foundation to help the common people in Ramadan, Eid-ul-Fitr, and Eid-ul-Adha, will be remembered by all. Through those works, that void would be filled to some extent. And that would be the best tribute to his memory.

Musa Bhai is no more. I pay my deep respects to his memory.

N.B: The article was mainly written in Bengali. Later, translated into English.