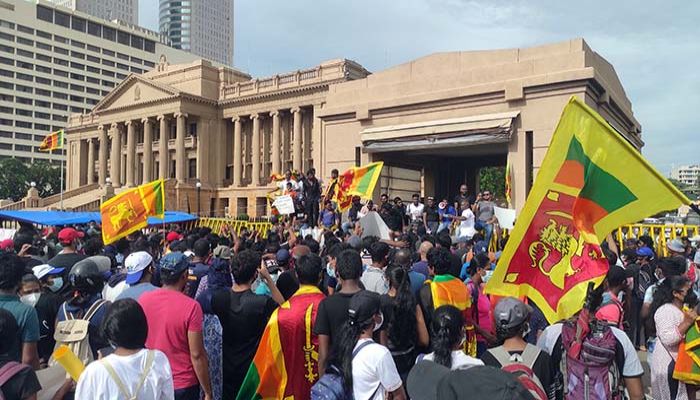 On April 12, a prolonged economic crisis came to a head as the Sri Lankan government temporarily halted payments to international creditors. This is the first time Sri Lanka has defaulted in its post-independence history, and it comes as no surprise to those who have followed the government's incredible economic mismanagement since the election of President Gotabaya Rajapaksa in November 2019.

Sri Lanka's economy really began to unravel a long time ago—when Gotabaya's brother Mahinda Rajapaksa was president between 2005 and 2015. After the end of Sri Lanka's civil war in 2009, foreign direct investment and portfolio flows from global capital markets poured into the country. This was facilitated by Chinese capital surpluses and the 2007-2008 global financial crisis, after which loose global monetary policy meant that Sri Lanka was able to borrow easily.

The Mahinda Rajapaksa government officially recorded years of spectacular growth, but the growth was of a particular type: large scale infrastructure projects such as highways, an airport, and a lotus tower that were tainted with corruption, provided low returns, and filled the pockets of a politically connected, protectionist, and parasitic class of businesspeople. Meanwhile the president's critics were intimidated, and journalists were killed or disappeared, generating widespread fear and a climate of self-censorship.

When a new government was elected in 2015, freedom of expression and human rights improved. (Full disclosure: I worked with the late Mangala Samaraweera, then foreign minister, between 2015-2017.) The years 2017-2019 saw a brief period of tax reform, so, despite droughts and rising global interest rates, Sri Lanka ran its first major primary surplus in 60 years in 2017 and achieved another in 2018. Though the country, under the coalition formed between Maithripala Sirisena and Ranil Wickremesinghe, moved away from the isolationism that plagued Sri Lankan economic and foreign policy in the preceding decade, it didn't do enough to reverse protectionism or to fight corruption.

The coalition had barely started to implement the reforms that would make exports more competitive, provide greater Central Bank independence, or loosen the stranglehold on trade before political instability set in. A constitutional coup engineered by the Rajapaksas saw Ranil Wickremesinghe and Mahinda Rajapaksa simultaneously declare their right to be prime minister and derailed the government's reform agenda. In April 2019, suicide bombers struck churches and hotels, killing nearly 270 people in the devastating Easter Sunday attacks.

The Rajapaksa family, then in opposition but claiming popular legitimacy and a right to office, railed against reforms like taxes and a fuel-pricing formula that were critical to economic stabilization; they used the Easter attacks to mobilize fear of minorities and claimed that they alone could bring the perpetrators to justice and restore national security. Much of their legitimacy stemmed from the fact that Mahinda Rajapaksa and his brother Gotabaya Rajapaksa, then the defense secretary, had ended Sri Lanka's civil war in 2009—despite war crime allegations and the incredible loss of civilian life during the final stages of war.

In 2018 and 2019, long before COVID-19 arrived in Sri Lanka, the country was already in a challenging macroeconomic position. A long history of weak export performance and declining revenue collection since the 1990s (as policymakers continuously exempted the wealthy and businesses from taxes) meant Sri Lanka just wasn't earning enough ​​to pay back its dollar loans. Between 2015 and 2019, 89.8 percent of new debt taken on by the government was used to pay back interest on outstanding loans accumulated by the end of 2014.

But then Gotabaya Rajapaksa was elected president. And an economy that was deteriorating slowly began to unravel at warp speed. Instead of addressing the economy's many structural shortcomings, the government made concessions to rent-seeking crony capitalists and leaned into a divisive ethnonationalism—continuing to suppress Tamils in the economically depressed north and east while also supporting anti-Muslim hate campaigns that first began around 2012.

The Rajapaksa government passed the 20th Amendment to the Sri Lankan Constitution, undermining the independence of critical institutions such as the National Audit Office and the Commission to Investigate Allegations of Bribery or Corruption, on the basis that the president needed more executive power to conduct his duties. It lowered taxes for the wealthy and increased tax holidays for corporations, despite the country's exceptionally low tax-to-GDP ratio. It used the rhetoric of self-sufficiency to empower protectionists and imposed import restrictions so high that Sri Lanka was nearly a closed economy. It introduced an unsustainable chemical fertilizer ban that would devastate agricultural yields—including paddy and maize yields and major export earners such as tea and rubber.

The unraveling that began in 2005 only accelerated in 2019. The government failed to deliver justice for the victims of the Easter Attacks and alienated minorities by forcibly cremating Muslims and Christians who died of COVID-19. (Although cremation is a traditional funeral rite for Hindus and Buddhists, Christians and Muslims bury their deceased loved ones.)

It appointed individuals implicated in war crimes to the administration and expanded surveillance and militarization in the minority-dominated Northern and Eastern regions. It failed, in other words, to incorporate productive minority citizens into its nation-building projects, and it alienated them instead. It employed the same racially divisive governance style that led to civil war and brain drain—perhaps the two biggest contributors to Sri Lanka's historic economic decline.

Instead of rationalizing public expenditure, the government spent more on defense during peacetime than it had done during the civil war. And in true Rajapaksa fashion, it cracked down on dissent—arresting government critics without charge under the draconian Prevention of Terrorism Act and intimidating journalists and activists representing the relatives of the forcibly disappeared.

No serious observer believed the country was going to be able to pay back the $29 billion in debts it owed over the next five years, or the nearly $7 billion in debt it owed this year. But Sri Lanka's government, filled with Rajapaksa family members and loyalists, was buttressed by Sinhalese Buddhist supremacists, crony capitalists, the state-owned media, and some influential private media houses. It continued to gaslight its people.

It dismissed the economic meltdown as a short-term foreign currency and liquidity crisis, and it kicked the can down the road by refinancing debt using credit lines and currency swaps from India and China. And as the country dug into dwindling foreign currency reserves to pay back creditors, the Rajapaksa regime inevitably ran out of cash to meet Sri Lanka's essential needs: fuel, medicine, milk powder, and gas.

And yet, regime members and loyalists continued to argue that the country's debt was sustainable. As lines for fuel appeared around the country, and milk was rationed in shops, they claimed that there were no shortages—as if the people waiting (and later dying) in lines were part of some kind of sophisticated conspiracy.

As doctors struggled to save newborns in emergency care or others in surgery, the government claimed there was no drug shortage. As usable reserves dropped down to a month or two of imports—triggering a humanitarian crisis—the Central Bank insisted media claims about the impending sovereign default were nothing but "inaccurate stories, misleading opinions and deliberate misinterpretations spread by certain parties with vested interests." This craft of denialism, mastered through years denying war crimes and corruption allegations, was so recently rewarded by the 6.9 million voters who brought the Rajapaksas to power in 2019.

Reverting instead to their well-honed modus operandi, the Rajapaksas made a dire political miscalculation. Historically, those who criticized the Rajapaksas, challenged corruption, or demanded war crimes investigations were branded extremists, terrorists, or threats to the national interest. This decades long strategy propped up the Rajapaksas' self-portrayal as Sri Lanka's uncontestable patriots—those who alone who had the true interests of Sri Lanka at heart, and the only ones who were able to address the country's national security and economic needs.

But as fuel lines lengthened and power cuts began, voters who enjoyed Sinhalese Buddhist supremacy and believed in these myths and the minority bogeyman from which they were supposedly being protected would be sorely disappointed.

It is now they who are the enemy. Protesters, this time including vast numbers of Sinhalese Buddhists, have organically taken to the streets to express their frustrations. And this time the Rajapaksas have branded them extremists or "politically motivated" too. Police used tear gas and water cannons to disperse protests. Journalists reporting on the protests were detained and assaulted. A state of emergency, curfew, and social media ban were imposed—until the government realized these measures were amplifying, not quelling, public discontent.

Soon after the prime minister's son announced that social media bans were "useless" because of virtual private network availability, disinformation campaigns started to spring up. As the Rajapaksas refuse to step down, propaganda intended to instill apathy has multiplied. But as the shortages and inflation persist, so do the protests. On April 19, police violence in Rambukkana killed a protester and severely wounded others.

The very tools that were used for decades to prop up and fight the minority bogeyman—gaslighting, denialism, disinformation, and state repression—are being repurposed against those who protest economic mismanagement. But expanding the net of supposed extremists, bogeymen, and so-called mischief-makers to everyone impacted by the economic crisis is of course politically unsustainable.

Now, as the economic crisis deepens, the Rajapaksa divide-and-rule strategy is unraveling. It's clear to all the protesters impacted by inflation, 13-hour power cuts, and drug and fuel shortages that the peaceful expression of dissent is not "extremist." A citizen exercising their right to peaceful assembly and protest need not be "politically motivated." International assistance is not always "a conspiracy." Cosmetic accountability—for example, when a cabinet resigns and then is reappointed—is not accountability at all. When minorities or journalists call for truth and justice, it is not because they are on "racist witch hunts" or because they are "terrorists" but because no human should live in a world in which atrocious crimes are so casually committed and so hastily normalized.

Recognizing their political miscalculation in widening the net of so-called extremists to working-class Sinhalese Buddhists, many their own voters, the Rajapaksas have now begun to apologize. They have begun to reverse some policy decisions and to acknowledge some peripheral grievances of the protesters, even if they pretend it is only a "section" of the public which protests. But it is too late: The foundation of lies and racism on which the Rajapaksas have built up their political legitimacy is slowly crumbling.

While many Tamils remain justifiably skeptical about the potential of protests to deliver lasting shifts in the country's ethnocratic political structures, northern and eastern Tamil leaders have begun to address the Sinhalese people—not their manipulative leaders—directly and charismatically. Muslim women are leading chants about the discrimination they've faced, and workers from plantation communities are calling out for land they've long been denied. In the south, there are even calls to boycott Rajapaksa-affiliated politicians and allied businessmen.

The so-called carnival of protests in the capital is educational, almost like a science fair under the banner of "Why the Rajapaksas must go home." As one impacted group learns about the injustices and grievances faced by another, it is empathy—not apathy—that is growing. And the largest lie of all—that the country depends on the Rajapaksas, benefits from their rule, and owes them silent loyalty—has entirely collapsed.

Amita Arudpragasam is a Sri Lankan writer and a graduate of Harvard's Kennedy School of Government and Princeton University. Twitter: @aarudpra