Time to Make the Rich Pay for Climate Change 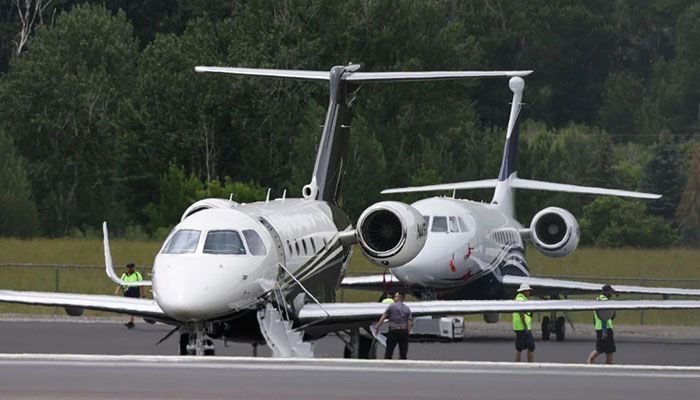 A private jet on the tarmac at Friedman Memorial Airport in July 2022 in Sun Valley, Idaho, US || Photo by Kevin Dietsch/Getty Images

﻿﻿﻿“We tend to say ‘we are all in the same boat’, but frankly we are not. We are all in the same ocean, but not in the same boat.” EU Climate Change Commissioner Frans Timmermans was thinking of vulnerable, low-income countries when he made this remark, but the thrust of his quote also holds true for the division between the richest and the less well off in all countries. While the poorest everywhere are trying to stay afloat, battered by a storm of high energy and food prices and falling real wages for many, the richest continue to hop around in their private jets.

Yes, we must all change our behaviour and drastically reduce our emissions, but in 2023 let’s stop pretending we are all in this together. We need policies that force the very rich to pay for the outsized amount of pollution they cause.

Kevin Anderson, professor at the University of Manchester’s Tyndall Centre for Climate Change Research in the UK, and economist Ann Pettifor have been making this case for years. “The green movement has lost its way by making us feel we are all equally responsible for the [climate] crisis,” Pettifor said when I interviewed her in 2021. Both have called for emission reduction efforts to be focused on the world’s wealthiest 10% of individuals, who are responsible for 50% of global carbon emissions – and especially the top 1%. The super rich contribute close to 17% of global emissions.

The UK has one of the most unequal income distributions in Europe. Here the richest 10% use more energy on flights than the poorest 20% use on everything, tweeted Carbon Brief’s Joe Goodman last month.

The emissions discrepancy is starting to attract attention, with particular focus in 2022 on the carbon footprint of private jets. Fygskam or ‘flight shame’ may be fashionable, but just 1% of people cause 50% of global aviation emissions. Private jets have a disproportionate impact on the environment because of their low passenger load and the very short distances they cover.

This winter many people are, often by necessity, reducing their emissions by keeping the heating off or the thermostat turned down low. If all EU citizens were to put on an extra jumper, take the train or implement other energy-saving measures, enough oil to fill 120 super tankers and enough natural gas to heat almost 20 million homes would remain untouched, according to the International Energy Agency and the European Commission. Such actions would also benefit the climate.

The problem is that many citizens taking such steps are doing so to the detriment of their health. More than seven million vulnerable people in the UK are living in cold, damp homes in an attempt to save money; these are not the very rich.

Public pressure could trigger change. Paris Saint-Germain’s star striker Kylian Mbappé found it hilarious when questioned last autumn about the team’s decision to take a private jet from Paris to Nantes, a two-and-a-half hour train journey away. French President Emmanuel Macron weighed in to suggest Mbappé’s reaction was inappropriate given the climate crisis.

We need more than finger-wagging from policymakers, however. The super rich’s climate-punishing antics must be taxed and the money raised used to support, in Pettifor’s words, “the ecosystem and the economy”. T&E suggests levying an air ticket tax of at least €3,000 on all private jet departures from Europe – the hundreds of millions of euros raised could help fund the development of clean aviation technologies.

Belgium appears to be leading the way. In December, the government announced new taxes from 1 April 2023 on older, noisier planes, private jets and short-haul flights in a bid to reduce pollution. Meanwhile, France has banned short-haul flights on three domestic routes – although the overall impact of that ban is debatable. More routes were not included because the rail service was not deemed good enough. Private jets are also excluded, leaving Mbappé and company to continue to pollute with impunity.