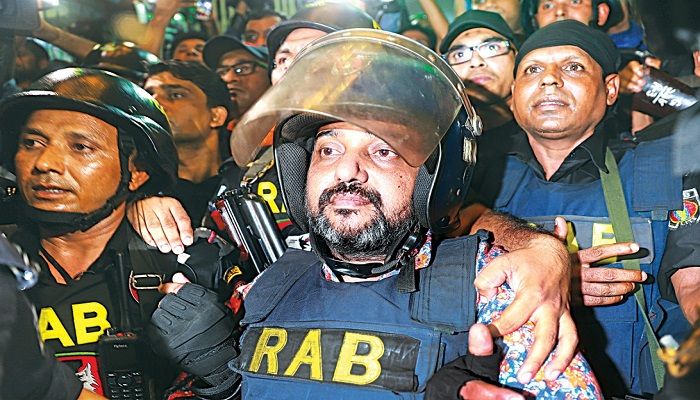 Expelled president of Dhaka City (South) Jubo League Ismail Hossain Samrat being taken to his Kakrail office in the capital by Rab during a raid there. Samrat was arrested in Cumilla yesterday. Photo: Collected 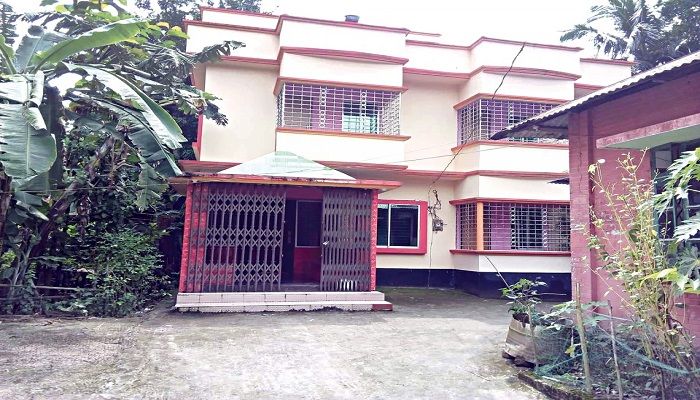 The house in Cumilla where Samrat was arrested yesterday. Photo: Collected 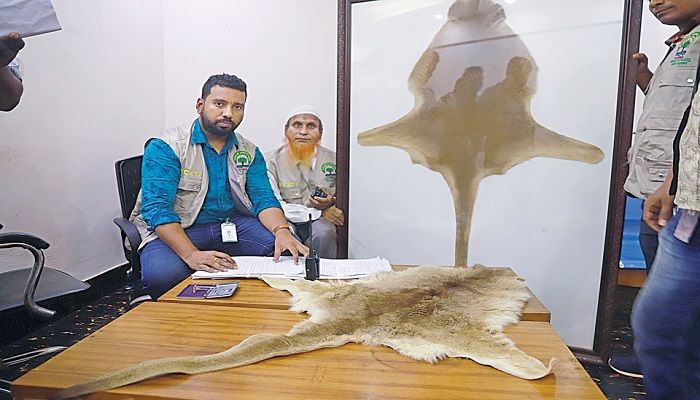 Two kangaroo hides and bottles of liquor seized from Samrat’s office in the capital. Photo: Collected 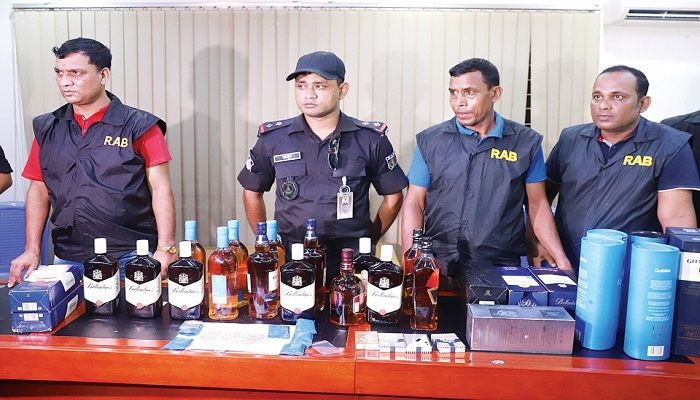 ﻿Jubo League leader Ismail Hossain Chowdhury Samrat, one of the casino kingpins arrested has finally put an end to speculations about his arrest since the drive against corruption began over two weeks ago.

The Rapid Action Battalion said it arrested Samrat, president of Jubo League Dhaka South unit, along with his close aide Enamul Haque Arman, vice president of the unit, from Cumilla around 5:00am yesterday, raiding a house near the Indian border.

Samrat was then brought to the capital, and the elite force conducted operations at various establishments where the Jubo League leader either lived or carried out political and business activities.

Rab also took Samrat to his political office in Kakrail where he had been reportedly staying since the crackdown began on September 18.

Following a five-hour search at the office, the elite force at a press briefing said it seized two electric machines used for torturing people, a pistol with five bullets, two hides of Kangaroo, 1,160 pieces of Yaba and 19 bottles of foreign liquor from there.

Besides, cases will be filed against Samrat for possessing illegal arms, ammunition, yaba and foreign liquor, added Alam.

The Rab members also searched two of his houses in the capital’s Shantinagar and Mohakhali DOHS areas.

Samrat controlled illegal casino business at different clubs in the capital and was also involved in tender manipulation and extortion, according to sources in law enforcement agencies.

His involvement in casino business surfaced on the very first day of the drive, but it took law enforcers more than two weeks to arrest him.

According to the sources and media reports, Samrat, along with several hundred of his supporters, dug in at his Kakrail office soon after the drive started on September 18.

There were also reports that Samrat was under surveillance of law enforcers and intelligence agencies. But several days later he went traceless and his supporters deserted the office, causing rumors to run rife over his whereabouts.

On September 24, the government imposed a travel ban on Samrat, meaning he could no longer leave the country.

Amid such a situation, Home Minister Asaduzzaman Khan on September 28 urged the media to wait. “You will see … very soon,” the minister said.

Speaking at a general meeting of Bangabandhu Awami Ainjibi Parishad in the capital on Saturday, Taposh, also member-secretary of the parishad, said, “Why Samrat has not been arrested yet despite directives from the prime minister? Why a smokescreen has been created over it? Who are conspiring and trying to save him -- we need to see.”

Yesterday, Rab Director General Benazir Ahmed said Samrat had left the capital and gone into hiding one or two days after the crackdown began.

“He used several ploys to avoid arrest,” Benazir said at his office at the Rab headquarters.

The Jubo League leader was arrested over specific allegations of involvement in casino business. His name surfaced several times during the ongoing drive, he said.

Replying to a query, the Rab boss said, “The arrest of one or two and drives for a couple of days will not work… We are working together ... Let’s have patience.”

Asked about the financial beneficiaries of casinos, he said “We have shut casinos and are trying to arrest those directly involved in those. We are moving forward slowly.”

At a press briefing after the five-hour search at Samrat’s office, Lt Col Sarwar Bin Kashem, commanding officer of Rab-1, said they carried out the drive based on information provided by Samrat.

In reply to a question, he said they would be able to disclose the names of Samrat’s godfathers and patrons after probe.

Asked what charges would be brought against Samrat, he said they are now investigating whether the Jubo League leader was involved in money laundering.

“Cases will be filed against him if we find his links to money laundering,” added the Rab official.

Hours after the arrest of Samrat and Arman, Jubo League expelled them from the youth wing of the ruling Awami League for their involvement in anti-social activities and breach of party discipline.

Besides, Rab raided the houses of two AL leaders in Old Dhaka and seized a huge amount of money, gold ornaments and firearms.