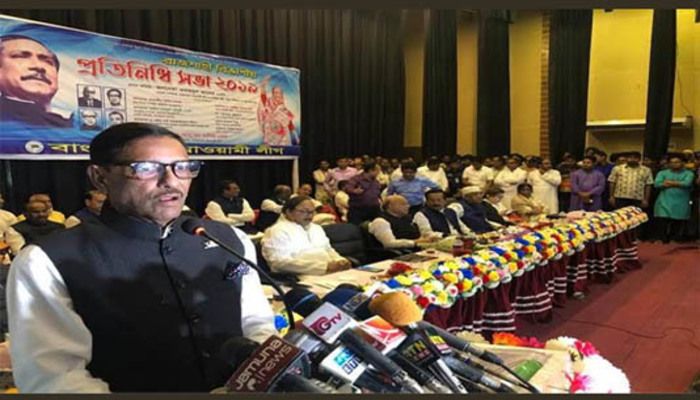 ﻿Awami League (AL) General Secretary and Road Transport and Bridges Minister Obaidul Quader here today said AL don’t support the ban of students’ politics but committed to bring anyone found to be involved in any wrongdoing to book, reports BSS.

He made this observation while replying to a question of journalists at the circuit house here today. He added that all of those including the godfathers who are engaged in the casino and other wrongdoings have remained under the surveillance of the law-enforcers.
He also addressed the Rajshahi divisional delegation conference of AL at Shilpakala Academy auditorium today as chief guest with AL Presidium Member Md Nasim in the chair.
Some 240 district and Upazila level presidents and general secretaries of the party from all eight districts under the division attended the conference.
AL General Secretary Quader gave a strong warning against terrorists, land-grabbers, extortionists, drug-traders, tender manipulators and corrupt people.
He told the party leaders that Prime Minister Sheikh Hasina has already started actions against parasites and errant inside the party across the country not only in Dhaka. The government will not care about the strength or muscle power of rough politicians and workers, he added.
Sheikh Hasina’s action has been started in a bid to uproot weeds and other bad elements from Awami League and all of its affiliated bodies to keep the party’s image intact, party’s General Secretary Obaidul Quader said.
Noting that conspiracies are being hatched against AL, Quader said all leaders and activists should remain united to thwart the conspiracies. He went on saying that dedicated leaders and workers are the lifelines of the party so their interests must be protected. “Our national council is scheduled to be held on December 20 and 21 next. Before the council, we want to build a clean-imaged, modern, smart and purified AL,” he said adding that only the purified blood will be transmitted into AL through dropping out all the polluted blood.
He said: “We need a clean-imaged party under the leadership of Sheikh Hasina throughout the country before the national council”.
Minister Obaidul Quader reminded BNP’s Fakhrul Islam Alamgir that BNP is now on the edge of the deep hole for its various misdeeds including nationwide looting, money laundering, terrorism, and extortions.
AL Joint-secretary Jahangir Kabir Nanak, Organizing Secretary Khalid Mahmud Chowdhury, Mayor of Rajshahi City Corporation AHM Khairuzzaman Liton, party central committee members Dr. Rokeya Sultana, Advocate Nurul Islam Thandu, Amirul Alam Milon and Professor Merina Jahan also spoke.
Food Minister Sadhan Chandra Mazumder, State Minister for Foreign Affairs Shahriar Alam, ICT State Minister Junaid Ahmed Polok and Members of Parliament also attended the meeting.