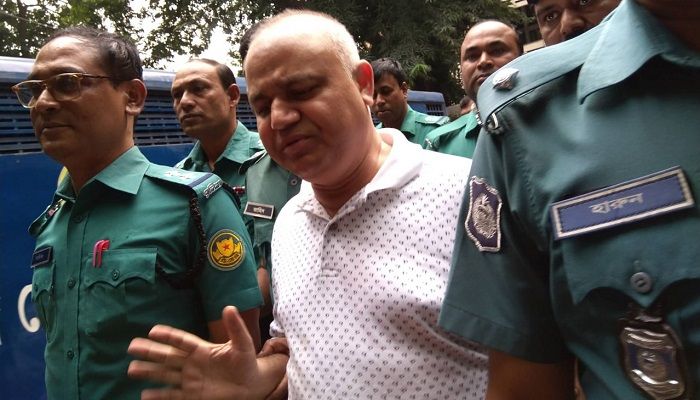 Contractor SM Golam Kibria Shamim is being taken before a Dhaka court in connection with a corruption case on Sunday, October 27, 2019. Photo: Collected

Dhaka Senior Special Judge (in-charge) Md Al Mamun passed the order after investigation officers of Anti-Corruption Commission (ACC) produced them before the court with a 10-day remand prayer for each of them.

The court also rejected bail petitions filed by them.

On October 21, Shamim and his mother were sued by the ACC Anti-Corruption Commission (ACC) for amassing Tk 297.08 crore wealth beyond the known source of income.

However, ACC did not find any legal source of the wealth.

Shamim is known to be an influential contractor of the Public Works Department and other government organisations. His firm GKB & Company (Pvt) Ltd is handling 15 major construction projects of the government, involving around Tk 3,000 crore.

On September 18, Rab arrested Khaled for operating a casino. Two days later, Shamim was arrested from his Niketon residence. They were later sent to jail in separate cases.

According to the First Information Report (FIR), Khaled showed his movable property worth Tk 1.66 crore. However, the ACC believes the value of the property would be Tk 4.50 crore.

Besides, Khaled in his 2018-19 income tax file showed having immovable property worth Tk 1.32 crore. Of these, ACC did not find legal source of Tk 90.16 lakh.

Earlier, four cases were filed against Khaled, who used to run a casino in Fakirerpool Young Men’s Club, under the firearms, narcotics control and money laundering acts