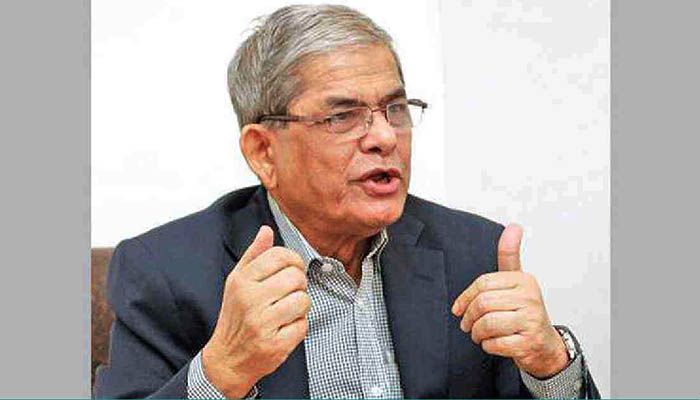 In a statement, party secretary general Mirza Fakhrul Islam Alamgir said the Prime Minister and other ruling party leaders have now been spitting venom on their party chairperson Khaleda Zia over the August-21 incident though no one made any comment about her involvement in the incident in the past.

''Pointing at the BNP chairperson, the Prime Minister yesterday (Friday) said you wanted to kill me. She also made some fabricated and baseless remarks about Begum Zia that are unbecoming and completely politically motivated,'' he said.

Fakhrul said, ''We strongly condemn and protest the reckless, irresponsible, fabricated and untrue statement of the Prime Minister regarding BNP Chairperson Khaleda Zia.''

Hearing the news of that sudden attack in 2004, he said then Prime Minister Khaleda Zia became very upset and stunned, and she promptly enquired about the casualties.

He said though she tried to go to Sheikh Hasina’s Sudha Sadan residence to console her, failed to do so because of the strong opposition by Awami League leaders and activists.

''The bombing incident of August 21 is undoubtedly horrific and the casualties from it are touching and heartbreaking ones. The then President, Prime Minister, Speaker and Cabinet condemned the horrific attack, and expressed their condolences and sympathies to the victims' relatives and expressed their firm conviction that the perpetrators would be brought to justice,'' the BNP leader said.

He said Khaleda Zia sent a letter of condolence and sympathy to the Leader of the Opposition Sheikh Hasina.

Fakhrul said FBI agents came from the United States to provide expert services for the proper investigation of the incident while a probe commission was constituted headed by a working judge of the Supreme Court as per the demand raised in parliament.

After returning to power in 2009, he said the current government started reinvestigation and a supplementary charge sheet was given by police including the names of Tarique and other BNP Leaders.

Fakhrul said the charge sheet was prepared with a political motive 'abusing' the state power and the power of police by involving retired police officer Abdul Kahar Akanda.

He said Kahar, who had been taking preparation for getting Awami League's nomination to contest the parliamentary election from his area, was given the charge for carrying out reinvestigation into the case only to take it to a different direction.

The BNP leader said the law enforcers recorded a confessional statement of militant leader Mufti Hannan to establish that Tarique and other BNP leaders directed him to carry out the attack.

He said Mufti Hanan himself appealed for the withdrawal of the statement as it was taken forcefully through torture.

Fakhrul said BNP has been involved in the August 21 case to implement a far-reaching blueprint to destroy the party its chairperson, Khaleda Zia and Tarique Rahman.

He also said the government has now made Khaleda its target after convicting Tarique and other BNP leaders through a 'farcical' trial and a supplementary charge sheet in the case by 'controlling' the judiciary.

On August 21, 2004, a grisly attack was carried out on an anti-terrorism rally of the Awami League at Bangabandhu Avenue when the BNP-Jamaat alliance was in power. The then opposition leader and current Prime Minister Sheikh Hasina was the main target.

At least 24 leaders and activists of the party, including its women affairs secretary and late President Zillur Rahman's wife Ivy Rahman, were killed and 300 others injured. Hasina narrowly escaped the attack but her hearing was badly damaged.

A Dhaka court on October 10, 2018, sentenced 19 people, including the then BNP-led government's state minister for home Lutfozzaman Babar to death.

Tarique Rahman, eldest son of BNP Chairperson Khaleda Zia, and 18 others were also sentenced to life in prison.