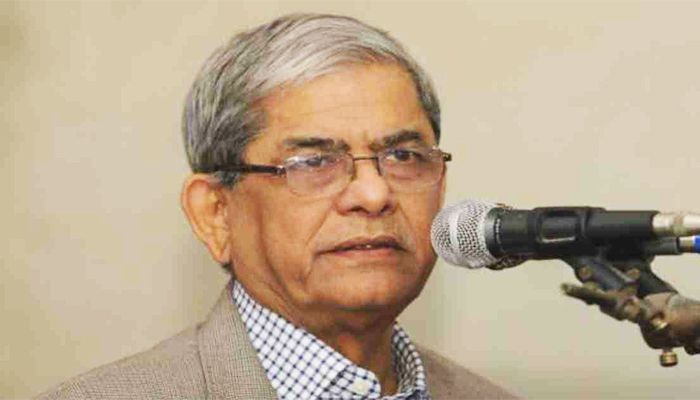 "You've noticed many buses were set on fire in Dhaka on Thursday last by miscreants. Awami League leaders are trying to shift the blame onto BNP for it. Like its previous old game, they’ll carry out such subversive acts by their agents to put the blame on BNP,'' he said.

The BNP leader said, "I would like to say no one should step into such traps. We've to move with people and continue the movement together with them. BNP has no relation in any way with those who’re carrying out such acts of sabotage. I strongly condemn such incidents.''

He called upon the government to find out those involved in such acts and put them on trial.

Fakhrul was speaking at the biennial conference of a faction of Bangladesh Federal Union of Journalists (BFUJ) held at the Jatiya Press Club.

He said the government is “snatching” the freedom of expression in a very well-planned manner so that no one can speak against them.

"On the other hand, they’ve established their full control over politics and started the process of depoliticization. They (govt) are now engaged in a conspiracy to eliminate BNP adopting the minus-one formula.''

Stating that a democratic movement against fascism is not an easy one, the BNP leader said their ongoing movement may linger further and a lot of sacrifices are necessary to make it a success. ''That's why all of us, the people of all walks of life, including journalists, lawyers, doctors, engineers and politicians need to be united as we did it during 1971 to protect the country and uphold the democratic spirit of the Liberation War. There’s no alternative to removing the current fascist and monstrous government.''

He alleged that Bangladesh has now become a ''terrorist country as the current ‘regime has been in power for over a decade by resorting to repressive acts.''

''Bangladesh is no longer a democratic and pro-people state. The country is now under the grip of a few oppressors and looters.''

Referring to the plight of journalists, Fakhrul said they are now going through a difficult time as many of them have become jobless. ''They're not getting any job or they’re being forced to quit jobs.''

He said the journalists are living with their families in dire straits. “In fact, not only the journalists but also people all over the country are now in difficulty. "Everyone who believes in freedom, democracy and the rule of law are now being persecuted and they're being picked up without any reason."

Fakhrul said not only the nationalist forces but also those who run newspapers and speak against the government are not being spared. ''A charge sheet has been given in a murder case against Matiur Rahman, editor of such a big newspaper like Prothom Alo. You’ll see many journalists are now facing repressive acts.''

He bemoaned that the journalist community now cannot play a strong role in protecting their rights as they have got divided. ''I always say journalists need to be united. You can unite and move forward with all the demands relating to your profession.''

The BNP leader said though the government enacted many anti-media laws like the Digital Security Act, journalists cannot put up any resistance against it and force the government to revoke those.