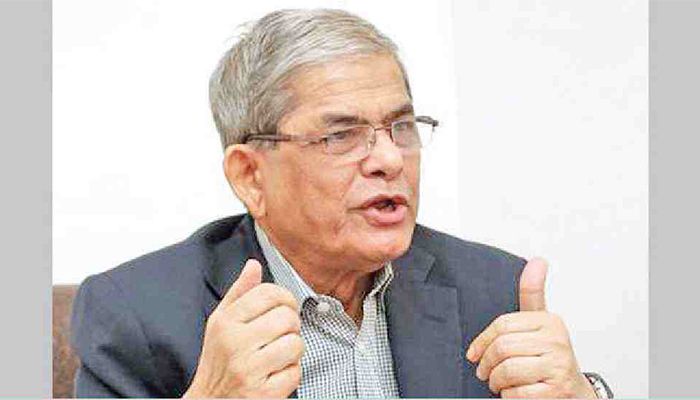 ﻿BNP Secretary General Mirza Fakhrul Islam Alamgir on Wednesday said the nation must follow the political philosophy of late great national leader Maulana Abdul Hamid Khan Bhasani to get rid of the 'deep crisis' the country has long been facing.

''We're now in a deep crisis. I would like to unequivocally say we must follow Maulana Bhasani and move forward with his philosophy to overcome this crisis,'' he told a virtual discussion.

BNP arranged the program marking the 44th death anniversary of Bhasani, popularly known as 'Majlum Jananeta', the leader of the downtrodden, who passed away on November 17, 1976.

Highlighting the political philosophy of the great leader, Fakhrul said Maulana Bhasani is really an extraordinary leader to those who speak and work for democracy and believe in Bangladesh’s independence and sovereignty.

''He (Bhasani) is the leader who showed us the importance of liberation, sovereignty and emancipation from exploitation,'' the BNP leader observed.

He said Bhasani started his struggle for people's emaciation from the slavery of the British and continued it throughout his life for attaining the country’s independence and ensuring the freedom and the welfare of people.

"He (Bhasani) had wanted to change society. He spoke in favour of the exploited people. That's why the rich and influential people and those who amassed huge wealth never like him. Those who worship imperialism call his activities violent while those who speak in favour of hegemony call him a fundamentalist,'' Fakhrul observed.

Fakhrul said Bhasani was pious but he was absolutely a non-communal person. ''He fought against communalism. He's like a star to us who can guide us to move forward.''

The BNP leader said Bhasani not only fought against the exploitation of the British and Pakistani rulers but also against those who wanted to make Bangladesh their own property.

He recalled Bhasani's movement demanding the withdrawal of the Indian army from Bangladesh after the country’s Liberation War. ''He also waged a movement against India’s Farakka Barrage.''

The 44th death anniversary of Maulana Abdul Hamid Khan Bhasani was observed on Tuesday with due respect.

Bhasani was a popular leader in his fight against imperialism and oppression of Pakistani rulers. He had led the historic Farakka March in 1976 to ensure Bangladesh's just rights to the share of Ganges River water.

Born in 1880 in Dhangara, Sirajganj, Bhasani earned immense popularity among peasants. He is regarded as the proponent of secular and left-leaning politics in present-day Bangladesh.