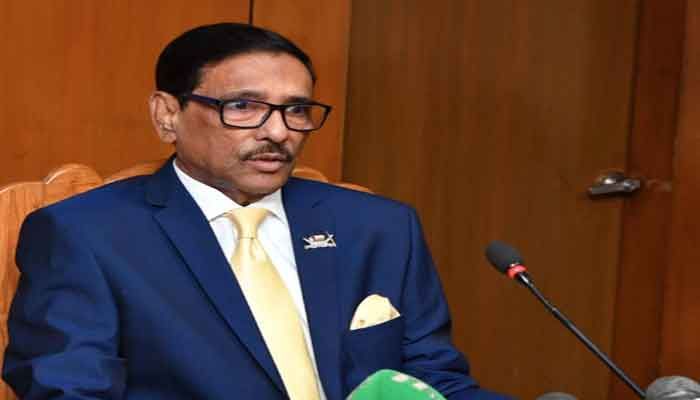 ﻿Awami League General Secretary Obaidul Quader said on Tuesday the BNP is showing skillfulness in spreading propaganda and rumors against the government and the constitutional institutions.

''The BNP is spreading propaganda and rumours in a planned way against the government and constitutional bodies,'' he told a press conference on contemporary affairs at his official residence.

Quader, also road transport and bridges minister, said the ruling Awami League is not dependent on anyone to run the country as the only strength of the government is the country’s people.

''When BNP leaders talk about the voting rights of people, electoral system and the Election Commission (EC), it makes me laughed. I memorize the record of voter-less election held during BNP regime. This party (BNP) has set a record in the country’s history by holding a voter-less and unilateral election during its time,'' he said.

Mentioning the irregularity by holding voter-less general elections on February 15 in 1996 and Magura by-election, the AL general secretary said ''Aziz Commission'' was the most controversial Election Commission in the country’s electoral system.

He said the ''Aziz Commission'' wanted to hold a farce election by enrolling 1.23 crore fake voters.

Asking the BNP leaders to see their faces in mirror before criticising anyone, Quader said people do not believe them as BNP had snatched away the voting rights of people during its rule.

The EC is a constitutional body and its jurisdiction and responsibility is to hold fair and participatory elections through enforcement of law, while the responsibility of the ruling Awami League, as a political party, is to cooperate with the EC, he said.

The AL general secretary said the BNP is yet to cooperate with the government in making a strong electoral system and even it is creating obstacle against it.

''The BNP leaders want assurance of victory in elections. If the EC guarantees victory to the BNP, then the Commission, in their language, will be a neutral one,'' he added.