BNP Makes Statements without Standing by People during Pandemic: Quader 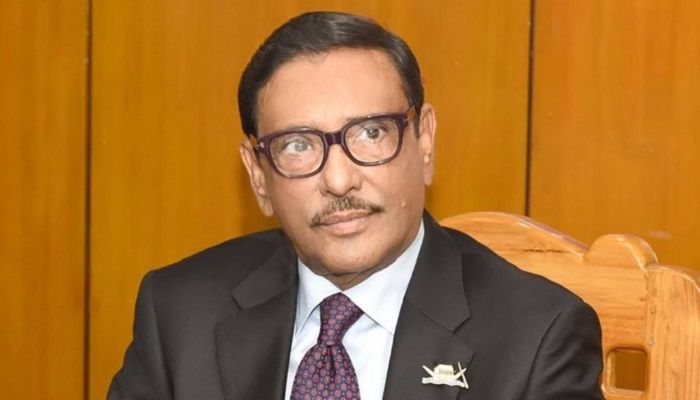 ﻿Awami League General Secretary Obaidul Quader today urged the country’s people not to pay heed to any rumour over coronavirus vaccines and alleged that BNP frequently makes statements amid the COVID-19 pandemic but it does not stand by the people.

“BNP does not do anything for the people. But if the government wants to do anything good, the party creates confusions among them by spreading propaganda and rumours,” he told a food distribution programme through videoconferencing from his official residence, reports BSS.

Quader, also the road transport and bridges minister, said the BNP's continuous falsifying and propaganda have spread at a high rate, keeping pace with the COVID-19 infections.

Coming down heavily on the BNP for its ill-politics, he said since the beginning of the coronavirus pandemic, no political party, except the AL leaders and activists, has stood by the helpless people.

“The BNP often makes big statements, but they do not stand by the people (during the pandemic),” the AL general secretary said, adding, “Now the politics is to stand by the helpless people.”

Quader said the Awami League does politics for the welfare of the country’s people and Bangabandhu's daughter Sheikh Hasina is doing it in continuation of the politics she learnt from her father.

Mentioning that the distribution of food aid among the lower-income and marginal people during lockdowns is a unique instance of humanity, he said: “We have to continue to stand by the destitute people all over the country ahead of Eid.”

He said a vested quarter is always out to make all the achievements of the government questionable and that is why everyone should be careful in reaching the incentives, announced by Prime Minister Sheikh Hasina, at the doorsteps of the deserving people.

About the COVID-19 vaccines, he said there is no reason to be worried about the vaccines. “Keep trust in the leadership of Sheikh Hasina…the daughter of Bangabandhu is the one who brings smiles on the faces of people by risking her life.”

“Don't pay heed to rumours about vaccines. The required vaccines will arrive in the country in time,” he added.

Stressing the need for building the fort of awareness at household level to prevent coronavirus, the road transport minister said wearing masks and following the health guidelines are the effective ways to get rid of the invisible enemy.

AL joint general secretary AFM Bahauddin Nasim said as per the instruction of the prime minister, the leaders and workers of Awami League, Chhatra League, Krishak League, Jubo League and other affiliated organisations have been working relentlessly, since the beginning of the pandemic, to address the ongoing crisis in the country.

On the other hand, he said, the BNP along with the communal forces wants to take political advantage capitalising on this crisis.