BNP Has No Respect for Court, Law: Hasan 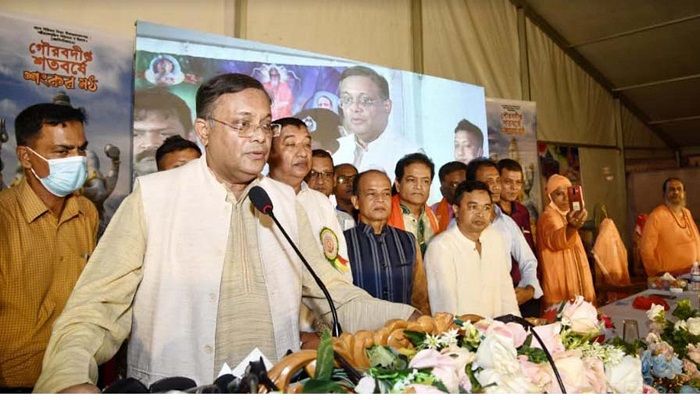 ﻿Information and Broadcasting Minister Dr Hasan Mahmud today said BNP leaders are making reckless and irresponsible comments as they have no respect for the court and the law.

“As per the comments of BNP secretary general Mirza Fakhrul Islam Alamgir, it seems that there is no need of laws and the court and the government can send Khaleda Zia abroad if it wants. If it is so, the government will have to play the role of the Judge Court, the High Court and the Supreme Court. But it is never possible and not appropriate,” he said, reports BSS.

The minister added: “The law minister has cleared that there is no scope to send Khaleda Zia abroad.”

Hasan, also Awami League joint general secretary made the remarks while replying to a query of journalists after attending the youth conference marking the 100 years of Sangkar Math and Mission at Sitakunda of the district.

He said crores of people are taking treatment in the country and there are a good number of hospitals, including Bangabandhu Sheikh Mujib Medical University. “Even, many come here from abroad to take treatment. It is a question why they raise voice to send Begum Khaleda Zia abroad for any problem like knee pain,” he added.

In fact, the minister said, they (BNP) are sowing disrespect to country’s doctors and hospitals.

He questioned whether the government could play the role of Judge Court, High Court and Supreme Court.

Hasan said those who wanted to create anarchy in the country during the Durga Puja are enemies of independence. “Their ancestors did not want our independence and they too do not believe in country’s independence.”

He said they still hold the Pakistani ideology and they are the enemies of the country. The culprits will have to be identified and there is no place of communalism in this secular country, he added.

The program was inaugurated by Srimat Paramananda Maharaj from USA while Bimal Kanti Das, councilor Shafiul Alam Murad and Dulal Dey, among others, addressed the programme.

Earlier in the function, Hasan said, “We came out of the communal state system of Pakistan to create a non-communal state. The persons who want to create anarchy in the name of religion are enemies of the society and the state as well.”