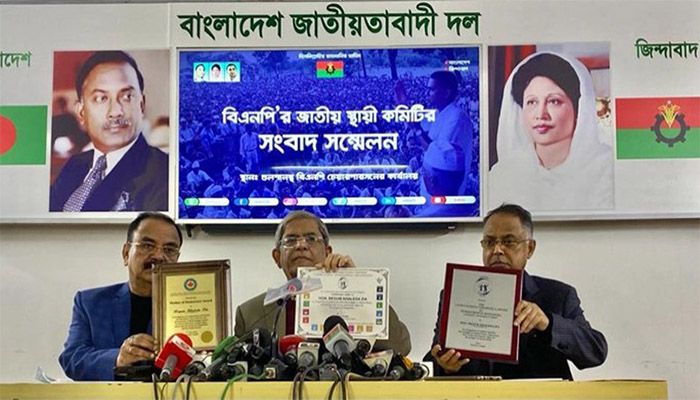 ﻿The Canadian Human Rights International Organization (CHRIO) has conferred BNP chairperson Khaleda Zia with the 'Mother of Democracy' award for her outstanding contributions to democracy.

BNP Secretary General Mirza Fakhrul Islam Alamgir presented the crest and certificates given by the Canadian organization at a press conference at the BNP chairperson’s Gulshan office on Tuesday.

“We’re delighted to inform you that the Canadian Human Rights International Organization (CHRIO) has provided our leader Begum Khaleda Zia with the award of ‘Mother of Democracy’ for her significant contributions to democracy and its protection,” he said.

The Canadian High Commission in Dhaka has also endorsed the award.

It is written on the crest of CHRIO that the Mother of Democracy Award was given to Khaleda Zia, “In recognition of outstanding contributions and devotion to the protection and advancement of disadvantaged people as well as democracy, human rights, peace and rule of law for Bangladesh and the world beyond”.

On February 1, BNP Chairperson Khaleda Zia returned after an 81-day stay in the capital's Evercare Hospital for the treatment of her various health complications.

Khaleda, a 76-year-old former prime minister, has been suffering from multiple diseases, including liver cirrhosis.

Her medical board members said Khaleda immediately needs to go abroad for better treatment as she was diagnosed with liver cirrhosis.

Khaleda, convicted in two graft cases, was freed temporarily through an executive order by the government on March 25, 2020._UNB