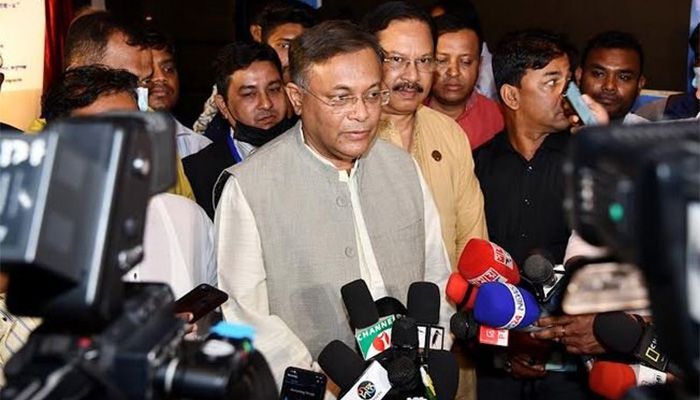 ﻿Information and Broadcasting Minister Dr Hasan Mahmud today hoped that BNP chairperson Begum Khaleda Zia and her party would remember the generosity that Bangabandhu daughter and Prime Minister Sheikh Hasina has shown to her.

Terming Sheikh Hasina a generous person, he said the Bangabandhu daughter has repeatedly given her the opportunity to stay home by suspending her jail sentence.

The minister was talking to journalists after the inauguration ceremony of WASA Sheikh Hasina Water Treatment Plant-2 project at Radisson Blu in Chattogram this noon.

Responding to an allegation of Mirza Fakhrul, Hasan said the AL leaders and workers always stand by the country's people in the time of crisis, but BNP never do so.

He said BNP only distributed a few packets of relief and held photo sessions for showing themselves in televisions, he said.

"As the AL leaders and workers were beside the people, five out of its 81 central committee members died during the COVID-19 pandemic, while many lawmakers died after distributing health safety materials and relief among the people," the AL joint general secretary said.

Replying a question, he said Begum Zia cut her birthday cake on August 15, by changing her date of birth, to ridicule the August 15 carnage and encourage the killers.

Hasan said Khaleda Zia and her husband Ziaur Rahman rehabilitated the killers of Father of the Nation Bangabandhu Sheikh Mujibur Rahman, while Khaleda and her son Tareq Rahman were involved in the August 21 grenade attack.

Prime Minister Sheikh Hasina went to Khaleda Zia's door and stood there for about 20 minutes to express her sympathy to Khaleda after her younger son's death, but the BNP chairperson did not open the door, he said.

The information minister said the government, led by Prime Minister Sheikh Hasina, has been focusing on the development of Chattogram from the very beginning.

The premier has taken the development responsibility of Chattogram on her shoulders and many mega projects are being implemented in Chattogram division accordingly, he added.

In its continuation, Hasan said, drinking water is being supplied to Chattogram city dwellers from Rangunia and the people of Rangunia are very happy for this.