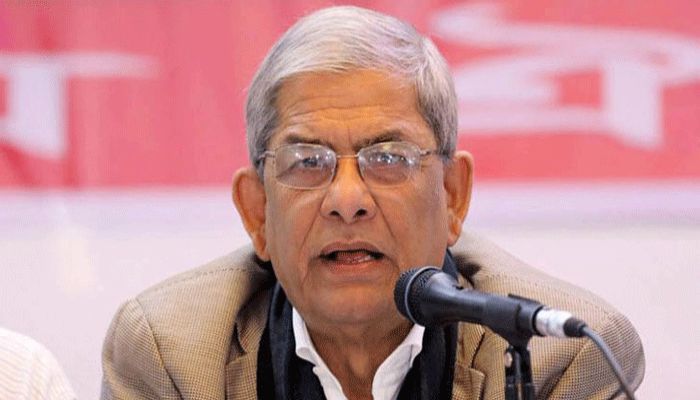 ﻿Slamming the government for raising the fuel prices, BNP Secretary General Mirza Fakhrul Islam Alamgir on Saturday voiced concern that it will hit the common people hard as the prices of all essential items will go up further.

The BNP leader came up with the remarks while addressing a rally in front of BNP’s Nayapaltan central office arranged by Jatiyatabadi Chhatra Dal, protesting the killing of its Bhola district unit president Noor-e-Alam and local Swechhasebak Dal leader Abur Rahim in police firing on July 31.

Stating that the presence of vehicles on the roads has reduced significantly on Saturday, Fakhrul said the fuel price hike will have a terrible impact on the economy of the country and badly affect people.

“Because the transportation cost will go up which will ultimately push up the prices of all essential commodities, including rice, pulses, salt and edible oils.

“The country will be affected and the common people, including the day-labourers, will be hit hard,” he feared.

The BNP leader alleged that the government has long been giving people false information about the country’s foreign exchange reserves. “But they’ve now sought a $4.5 billion loan from the International Monetary Fund (IMF) as the reserves shrunk.”

He said the IMF has given tough conditions for receiving its loan including withdrawing the government’s subsidies from different products and sectors. “So, they (govt) are now doing that (to get the loan)."

The BNP leader said state minister for power and energy Nasrul Hamid on Friday hinted at a slight increase in the fuel prices keeping them at a tolerable level, but the prices were raised greatly at night.

He said the government has been repeatedly hiking the prices of power, gas, fuel and soybean oil, leaving the country’s people in serious suffering. “The prices of green chilies are now Tk300. People have got agitated and unnerved due to such repression."

Stating that the current government has now become a ''dreadful ‘monster'', Fakhrul said it is now the only responsibility of the patriotic people to dislodge this regime to save the country from ruination.

Strongly condemning the police firing at their party’s peaceful programme in Bhola, he said this government has been staying in power by spreading fear, shooting people and killing and injuring them. “That’s why the incidents of killing have been taking place. The sacrifices of Noor-e-Alam and Abdur Rahim will make our movement for democracy stronger and intensify it.”

Fakhrul alleged that the Awami League government is not only attacking opposition parties and BNP but also indulging in widespread corruption to secure its illegal power.