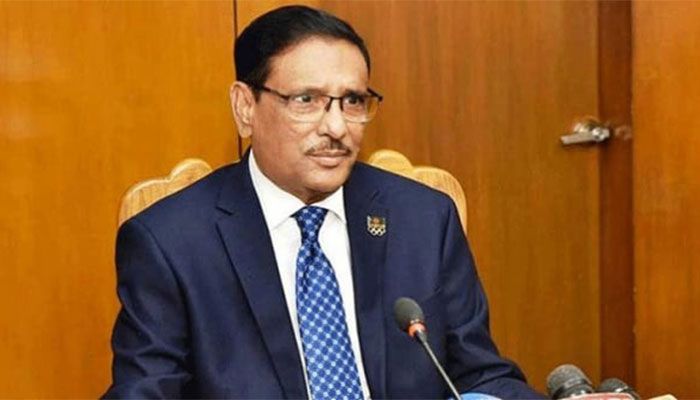 Awami League General Secretary Obaidul Quader today said BNP has resorted to unethical politics and the path of terrorists as the party is desperate to seize power in any way, reports BSS.

"BNP is desperate to seize power by any means and that's why its leaders have taken the path of unethical politics and terrorist tactics," he said in a statement.

Quader, also the road transport and bridges minister, said the BNP leaders are hatching deep conspiracy against the country and trying to create an unstable situation in the country too through spreading propaganda, creating panic among people and terrorist acts.

The AL general secretary said the BNP leaders, including its secretary general Mirza Fakhrul Islam Alamgir, are talking perplexed after not getting people's response to their anti-government movement.

"A public meeting ( of AL) held in Jashore yesterday proved once again that the people of Bangladesh have full confident in the government of Bangabandhu's daughter Sheikh Hasina," he said.

But, he said, the BNP leaders are carrying out their constant falsehood to get political benefits by spreading fabricated information and creating confusion through rumours.

Quader said the BNP is holding rallies in different parts of the country every day and at the same time, it is seeking political sympathy from its foreign masters by raising allegations that the government is creating obstacle to their rallies.

As a free democratic environment is prevailing in Bangladesh, the BNP leaders are able to speak lie every day against the government in the name of holding rallies, he said.

He said since there is free media and freedom of speech in the country, the BNP can continue its politics capitalising on media.

In fact, Quader said, the BNP is the main obstacle to the spirit of the country's Liberation War and democratic ideals and values.

The BNP always supports communal and anti-liberation forces, he said.

The AL general secretary said the government, led by Prime Minister Sheikh Hasina, is achieving remarkable development and progress in the country.

At that time, he said, Fakhrul is trying to mislead the people by making false allegations of government’s failure.

Prime Minister Sheikh Hasina never does politics for the lust of power, Quader said, adding that she has been doing politics with the great motto of public welfare.

He said the Awami League is never a ruler of the people but a servant.

"So, Bangabandhu's daughter Sheikh Hasina believes in heart and souls that the country's people are the AL's strength and the source of power," Quader added.