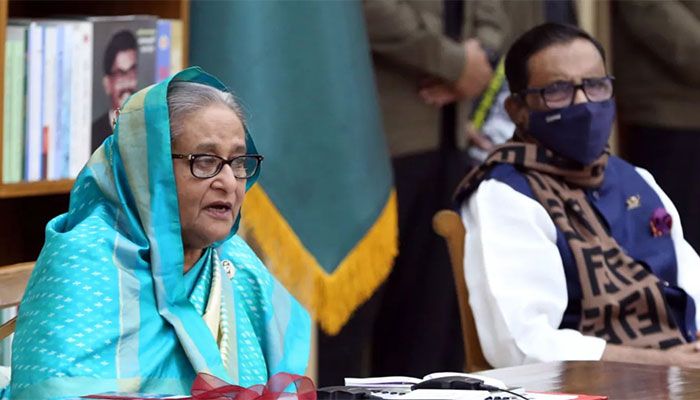 ﻿Prime Minister and Awami League chief Sheikh Hasina today firmly reiterated that her party always fulfills pledges made to the nation ahead of national elections.

The Prime Minister said this while delivering her introductory speech at the joint meeting of the AL Working Committee, National Committee and Advisory Council at her official residence Ganabhaban, reports UNB.

She said that the government is working for the country and its people as per its election pledges.

“We work for the welfare of the nation and people are benefiting from the results,” she said.

Coming down heavily on a section who “always criticizes the government unnecessarily”, she said that the development of the country does not make them happy.

Regarding corruption, she referred to her recent speech at the Parliament — asking to give her specific information on where the corruption is happening.

“Give me information, and I will take action. This won’t just be lip service,” she said.

Sheikh Hasina said that the discussion on corruption is coming from those who are corrupt and turned Bangladesh into “a champion in corruption” during their regime.

“Or doing microcredit business to overburden people with high interests against their loans — forcing them to leave their houses or commit suicide,” she said.

She mentioned that through the ‘My House My Farm’, people won’t need to take loans from the microcredit lenders with high interest rates.

Briefly describing the development activities of the government, she said, “Through developing every sector of the country, we have been able to reduce the poverty rate and generate employment.”

In this connection, she mentioned the freelancing opportunities across the country through which youths can earn money from their rural homes.

In the future, she said, the country’s exports will include food items and processed food, digital devices, and small mechanical items.

“We will be able to increase exports through the investments that are coming into our one hundred economic zones across the country,” she added.

She also said that due to the pragmatic and timely steps of the government in the last 14 years, people are now enjoying a better life.