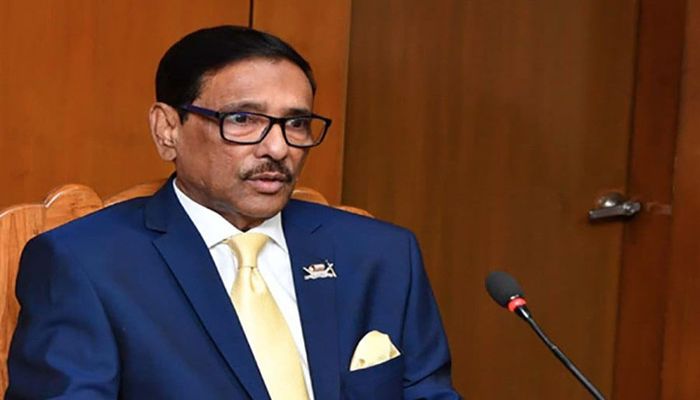 Awami League (AL) General Secretary Obaidul Quader today said the ruling party is not too weak that it would break down with a soft strike, claiming that the AL is deeply rooted into the soil of the country and the hearts of its people.

“The foundation of the Awami League has deepened into the soil of the country and the hearts of its people….ousting the party leader from power through shouting is nothing but a daydream,” he told a function, reports BSS.

The function was arranged at Syedpur Five Star Ground here this afternoon on the occasion of handing over warm clothes meant for the cold-hit people to the presidents and general secretaries of all district units of AL under Rangpur division.

Speaking as the chief guest, Quader said the AL will not create hindrance to any peaceful programme of BNP but it will remain alert to prevent any untoward incident in the country.

“If we are attacked, we will not sit idle…they (BNP men) carried out attack on police in Faridpur.  What would police do? Police fired tear shells and rubber bullets. Nobody got hurt. But Fakhrul (BNP secretary general) made falsehood over the incident,” he said.

Issuing a fresh warning that there would be a game against corruption, vote rigging and arson attacks, the AL general secretary said the game will be played against those who killed Father of the Nation Bangabandhu Sheikh Mujibur Rahman, rehabilitated the killers and stopped the trial of the assassins by promulgating indemnity ordinance, and those who killed the four national leaders.

He said there was an attempt to wipe out Bangabandhu's family through the 21 August grenade attack and the mastermind of the August 21 attack is living a luxurious life today on the banks of the River Thames by laundering money. “The game will be played against them.”

Highlighting the development activities of the AL government, Quader, also the road transport and bridges minister, said, “The days have changed in North Bengal. Railway has gone up to Panchagarh. Some 10 trains run on that route, while 16 planes arrive at Syedpur per day”.

“I visited monga-prone North Bengal several times with our leader. That monga has now gone to the museum because of Sheikh Hasina's policy. People of North Bengal, you, are lucky as six-lane expressway will go from Elenga to Bogura, Rangpur, Burimari and Panchagarh,” he said.

Quader said Prime Minister Sheikh Hasina has brought Bangladesh from darkness to light and it is Sheikh Hasina who always stands by the helpless people.

“Nine lakh winter clothes have been given for this region. Today, 27,000 winter clothes are being distributed in nine districts of Rangpur division,” he added.