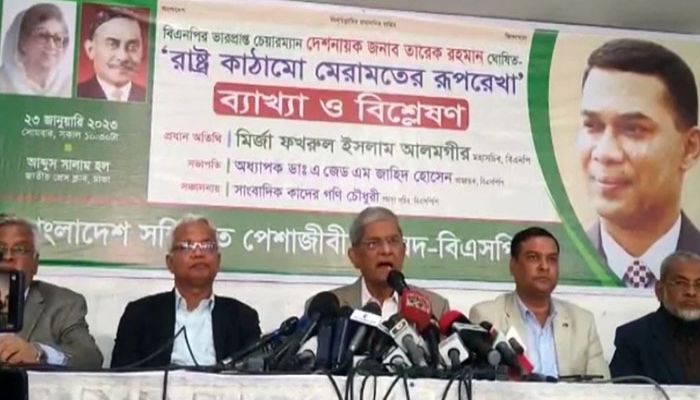 ﻿BNP Secretary General Mirza Fakhrul Islam Alamgir on Monday alleged that the government has turned the Jatiya Sangsad into a 'one-party club' by destroying the country’s electoral system, reports UNB.

“They (govt) have destroyed all the democratic institutions. Is it a Parliament that they have formed? They’ve created a one-party club.  It’s a club of Awami League,” he said.

Speaking at a discussion meeting the BNP Secretary General also said the government has ruined the electoral system to cling to power by force.

Stating that the electoral system is the gateway of democracy, he said the Parliament and cabinet are supposed to be formed to run the country through a credible election. “But they've destroyed the electoral system. People now do not go to cast their votes.”

Fakhrul alleged that Awami League has also destroyed the state structure by hanging onto power through a ‘unilateral’ election with 154 uncontested MPs and through vote robbery and taking votes the night before the polling date. “They have taken all steps to take all the state machinery to their favour.”

Under the current circumstances of the country, he said their party placed a 27-point proposal to reform the state and fix the state institutions.  “The 27-point outline is BNP’s dream and we’ll explain it before people. One can never succeed without a dream.  We’ll move forward with the dream.”

Fakhrul said their party has been able to create a mass wave of people against the government through their recent 10 divisional rallies and other programmes.   "The stormy wave that has begun will wash away the current regime since people are not with them.”

He said the first demand of their 10-point proposal is the resignation of the Awami League government by dissolving the Parliament for constituting a caretaker government, which will oversee next election.

After that election, the BNP leader said they will form a national government with the partners of their simultaneous movement to implement the 27-point outline.

He urged the BNP leaders and activists not to be frustrated as they are fighting to restore democracy and people’s lost rights, and to protect the country from misrule and fascism. “Why would we be disappointed? We are being successful, and we are moving forward. Hundreds of our leaders and workers went to jail. I have never seen any type of despair on their faces.”

Fakhrul said they have been in an imbalanced fight since their opponents are very powerful having the entire state apparatus, guns, and pistols in their hands. “Indiscriminately they attack us using those and then file cases against us.”

He said a Swechchasebak Dal leader activist Mokbul was killed in police action on December 7 last in front of BNP’s Nayapaltan central office. “On the contrary, a case was filed against our 450 leaders and workers. So, the bottom line is, we have to protect our existence and save our people.”

The BNP leader also alleged that the government has politicized the entire judicial system, depriving people of justice.

He bemoaned that the media also now cannot enjoy the freedom as they are being forced to exercise self-censorship. “One detective has been attached to every media house. They dictate what to write, create headlines and what to prioritise and what not to prioritise.”

Fakhrul, however, praised journalists for what he said and their efforts to present the truth amid so many limitations. “Can you imagine that the editors are facing cases, including for murder charges?”