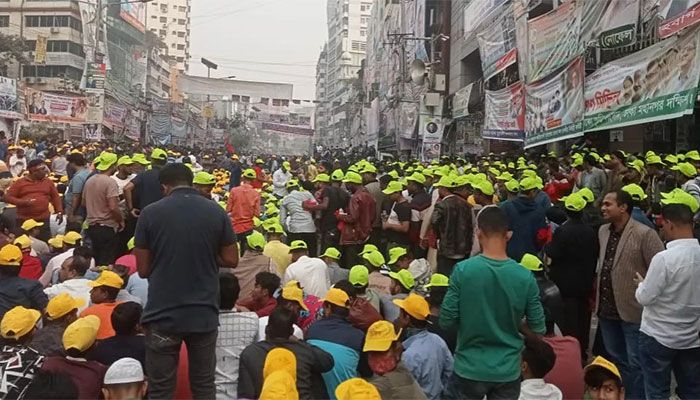 As part of the ongoing simultaneous movement against the current government, a rally of BNP began in front of its Nayapaltan central office with the participation of a huge number of leaders and activists of the party and its associated bodies, reports UNB.

The rally formally began around 2:30 pm with recitation from the holy Quran.

The organisers said the programme is meant for registering a protest against the introduction of one-party Baksal rule by Awami League on this day in 1975, rise in the prices of power and gas and mounting pressure on the government to accept their 10-point demand, including holding the next polls under a non-party caretaker government.

Hundreds of party leaders and activists started gathering at the venue in small processions since noon, halting traffic in the area that has caused public suffering.

An adequate number of law enforcers have been deployed in and around the rally venue to fend off any untoward incident.

BNP Secretary General Mirza Fakhrul Islam Alamgir will announce the next course of action from the rally.

Apart from BNP, other like-minded opposition parties, alliances and organisations are also observing a similar programme in Dhaka and other divisional cities and district towns on Wednesday as part of the simultaneous movement to oust the current government.

Meanwhile, Ganatantra Mancha and Ganatantrik Bam Oikya held separate rallies in front of the Jatiya Press Club and announced a countrywide demonstration programme for February 4. BNP is likely to announce a similar programme for the same day from its rally.

Besides, the 12-Party Alliance is holding a rally near Bijoy Nagar Water Tank while Jatiyatabadi Samamona Jote in front of the Jatiya Press at and LDP at FDC Crossing.