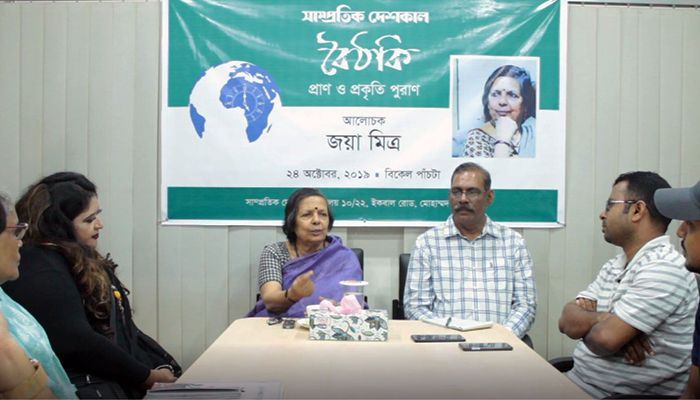 ﻿﻿﻿An eminent Indian author and activists Jaya Mitra said that cities produce nothing but garbage.

She made the remarks at a Boithoki (discussion) titled 'Pran O Prokriti Puran' organized by  Shampratik Deshkal at Iqbal Road, Mohammadpur on Thursday.

In her discussion, Jaya Mitra said that nature and mother are the same. ''As long as the baby is in the mother's lap, (S)he does not see the mother. (S)he stumbles, falls, hurts, but when (S)he grows up, (S)he has trouble; by the period, (S)he starts to learn about his/her mother in a new way. Nature is as same as this. We have so much, especially in our sub-continent, that we don't even care about. Being in a critical situation, we think where we would go if we can surpass these."

"From where I came from, tube-wells contained arsenic in water," She said.

''Tubewells are being installed continuously along with irrigation pumps. The length of the pipe has increased to a 30-foot pipe from 20. But we get rainwater in both hands. But, we don't care'', she added.

She also said that nature gave different characteristics to every living thing on earth. Human is the smartest among them for having a brain, for having the ability to think and love.

Jaya Mitra says, ''somehow modern society has an idea that working is not good. It's a matter of shame. I find it very interesting that the city produces nothing but garbage. The city cannot make food, make raw material for clothes, and even workers come from outside.''