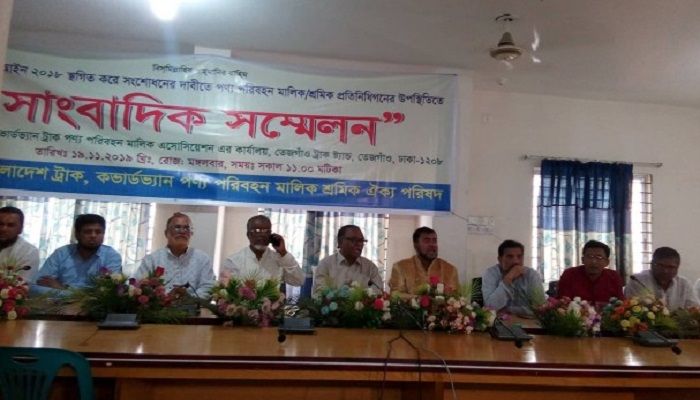 ﻿Bangladesh Truck Covered-van Goods Transport Owners Workers Unity Council announced to go on an indefinite strike across the country from tomorrow demanding amendment of the new Road Transport Act-2018 after postponing the law.

The council has also presented a nine-point demand for the amendment and will enforce the indefinite strike from 6:00am tomorrow, Convener of the council Rustam Ali Khan said today.

The announcement was made today at a press briefing at Tejgaon truck stand.

On October 22, the Road Transport and Highways Division issued a gazette, stating that the Road Transport Act (RTA) would be effective from November 1. Parliament had passed the RTA in September last year, replacing the Motor Vehicle Ordinance, 1983.

According to section 105 of the new act, if anybody gets seriously injured or killed in a motor vehicle-related accident, it would be considered an offence under the relevant sections of the Penal Code-1860.

However, no matter what section 304(B) of the Penal Code contains, if anybody causes accident by reckless and negligent driving, and kills or injures someone severely, the person will face a maximum sentence of five years in jail or fine or both, reads section 105 of the RTA.

The offences that fall under section 105 are not bailable.

For driving without licence, the maximum penalty is six months in jail or a fine of Tk 25,000 or both. It is same for running unfit vehicles.

The law says the maximum punishment for illegally modifying vehicles’ body parts is three years’ jail sentence or Tk 3,00,000 fine or both.