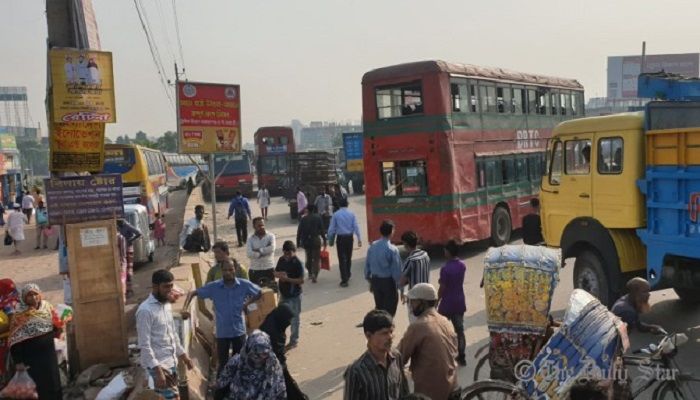 A strike by transport workers demanding amendments to the new road transport law has crippled the movement of buses, trucks and lorries in many parts of Bangladesh, much to the dismay of commuters and businesses.

Buses remained grounded in several districts in the country's south-western and northern regions for the past few days as transport workers abstained from work.

The strike disrupted long-haul bus services on the Dhaka-Chattogram, Dhaka-Sylhet and Dhaka-Tangail routes on Wednesday morning.

At the same time, a network of truckers and lorry owners have also joined the strike on Wednesday morning with many businesses suffering as a result.

Transport workers at Narayanganj’s Siddhirganj are blocking the road and impeding vehicular movement. Commuters  are suffering in Dhaka where buses remain parked in the main terminals.

Rustam Ali Khan, convener of Bangladesh Truck Covered-van Goods Transport Owners Workers Unity Council, said on Wednesday morning that a strike is being observed across the country and will continue until the demands of the transport workers are met.

We had a meeting with the Home Minister last night after announcing the program. But he failed to provide assurances about meeting our demands. That is why the strike is being observed and it will continue.

There is a possibility of another meeting with the home minister on Wednesday, according to Rustam.

''We will announce our next steps if anything positive comes out of that meeting.''

''Truck workers are obstructing the movement of buses at various places. Bus workers are also opposing the new transport law; they are not performing their duties.''

Buses heading out of Dhaka are being pulled over at Narayanganj's Signboard, Modonpur and Demra areas.

Most buses at the Mohakhali terminal have remained grounded due to the strike, Abdul Malek, general secretary of Mohakhali inter-district Bus Owners Association said.

The buses leaving Dhaka are not making the return trip, he added.

"Vehicles leaving for Khulna and Barishal are not returning from those districts. Disgruntled workers are not allowing the vehicles to come back. So there is a bus crisis in Dhaka."

The government introduced the new law following an unprecedented movement by students for safer roads, after two students were killed in separate road accidents in Dhaka.

The legislation has a provision for a five-year jail term and a fine as punitive measures for deaths in road crashes which has caused concern for transport owners and workers alike.

The law was published as a gazette on Nov 1 this year, but transport owners and workers have been protesting against the harsher punishments for traffic offences under the new legal framework ever since it was drafted.

On the other hand, the government delayed the implementation of the law by two weeks, as it lacked clarity.

Responding to the strike called by a section of transport owners and workers in 10 southwestern districts, Road Transport Minister Obaidul Quader vowed to press ahead with the enforcement of the new rules despite all difficulties.