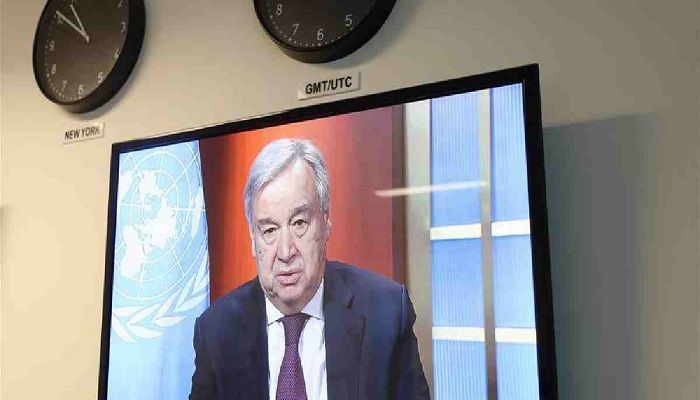 Photo taken on March, 25, 2020 at the United Nations headquarters in New York shows that UN Secretary-General Antonio Guterres speaking at the launch of the COVID-19 global humanitarian response plan via video teleconference. Photo: Collected from Xinhua

﻿UN Secretary-General Antonio Guterres on Wednesday launched a 2-billion-USD global humanitarian response plan to fight COVID-19 in some of the world's most vulnerable countries.

"We must come to the aid of the ultra-vulnerable -- millions upon millions of people who are least able to protect themselves. This is a matter of basic human solidarity."

The response plan will be implemented by UN agencies, with international nongovernmental organizations (NGOs) and NGO consortia playing a direct role in the response, said Mark Lowcock, the UN undersecretary-general for humanitarian affairs.

The plan will be coordinated by the UN Office for the Coordination of Humanitarian Affairs, which Lowcock heads.

The plan will deliver essential laboratory equipment to test for the virus, and medical supplies to treat people; install handwashing stations in camps and settlements; launch public information campaigns on prevention; and establish airbridges and hubs across Africa, Asia and Latin America to move humanitarian workers and supplies to where they are needed most, said Lowcock.

Guterres said the world faces an unprecedented threat as COVID-19 has rapidly covered the globe. "It has spread suffering, disrupted billions of lives and endangered the global economy."

Wealthy countries with strong health systems are buckling under the pressure. Now, the virus is arriving in countries already in the midst of humanitarian crises caused by conflicts, natural disasters and climate change. These are places where people who have been forced to flee their homes because of bombs, violence or floods are living under plastic sheets in fields or crammed into refugee camps or informal settlements.

Those people do not have homes in which to socially distance or self-isolate. They lack clean water and soap with which to do that most basic act of self-protection against the virus -- washing their hands. And should they become critically ill, they have no way of accessing a health care system that can provide a hospital bed and a ventilator, said Guterres.

Helping the vulnerable people is crucial for combatting the virus, he said. "The world is only as strong as our weakest health system. If we do not act decisively now, I fear the virus will establish a foothold in the most fragile countries, leaving the whole world vulnerable as it continues to circle the planet, paying no mind to borders."

Properly funded, the plan will save many lives and arm humanitarian agencies and NGOs with laboratory supplies for testing, and with medical equipment to treat the sick while protecting health care workers. The plan also includes additional measures to support host communities that continue to generously open their homes and towns to refugees and displaced persons, said Guterres.

It asks for 100 million dollars for NGO response.

Guterres appealed to governments for their full support to the humanitarian response plan, which, he said, is a necessity for global health security.

The plan is a moral imperative and in everyone's interests. And it is a crucial part of winning the fight against the virus, he added.