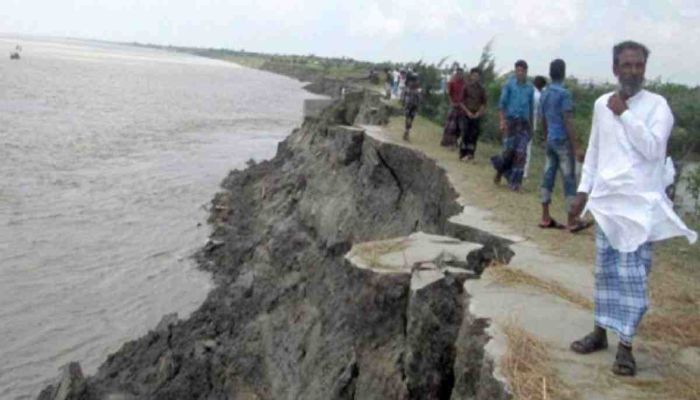 "The pain that riverbank erosion has caused over the past decade is immense. I have lost everything to the natural calamity — my home, my livelihood," says

Rabiul Islam, a resident of Koira upazila who has now relocated to Dhaka in search of work.

Like Rabiul, there are a large number of people who have suffered displacement and hardship in the coastal upazila due to continuous riverbank erosion and cyclones. In fact, natural calamities have rendered over 16,000 people homeless in Koira in the past 11 years.

Locals say that Kobotak and Shakbaria rivers cause riverbank erosion in the area. Over the past decade, the majority of farm lands and homes in the upazila have been washed away by the rivers. The number of people who are losing their lands to the rivers is also increasing with each passing day.

The ordeal, in fact, started in 2009 when Cyclone Ayla had hit the coastal area, flattening the majority of houses and prompting locals to flee. This year, Cyclone Ampan also caused huge destruction to the coastal upazila, damaging embankments at 21 places.

Of the 16,000 families in the upazila who had abandoned their homes due to the natural calamities since Cyclone Ayla made landfall, some 10 per cent have gone to local shelters, 60 per cent to various other places across the country and the remaining 30 percent to neighboring India, say local officials.

According to them, many residents of Koira are now settled in the neighboring districts of Satkhira, Jashore, Jhenaidah, Gopalganj, Bagerhat. The number of displaced people is increasing due to repeated riverbank erosion.

Also increasing salinity in water poses health risks to locals, forcing many to leave Koira. "The salinity problem started after Cyclone Ayla. The problem has only gotten worse since then. Due to salt water consumption, we are getting various skin ailments. This is another reason behind people leaving the area," says Altaf Hossain.

Experts attribute the frequent riverbank erosion to the fragile soil along the banks and suggest construction of tidal dams to prevent it.

Prof Dilip Kumar Dutt of the Department of Environmental Sciences at Khulna University, says, "The capacity and depth of the rivers is decreasing day by day. As a result, water is overflowing even when it rains a little. The riverbanks are breaking."

"Moreover, the rivers are changing directions now. The soil along the rivers is very fragile and breaks down easily. The river must be freed to deal with the situation. Tidal dams (TRMs) have to be set up on the river," he adds.

Koira Upazila Nirbahi Officer Animesh Biswas admits that many families have become homeless due to Cyclone Amphan. "These families are being given support by the government as well as the private sector," he says. "The entire coastal region needs a sustainable embankment."