Protests against Rape Continue Across Bangladesh 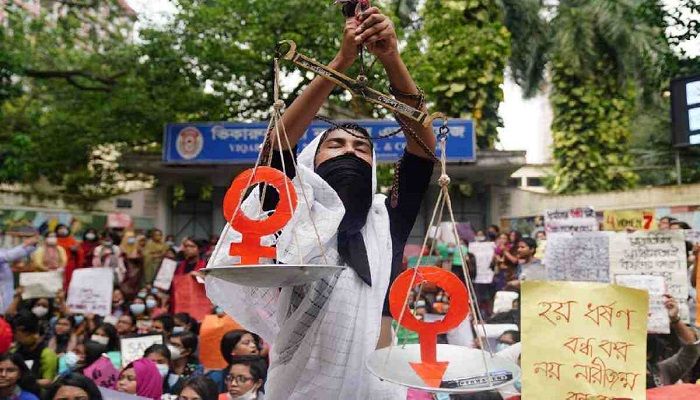 ﻿People from different walks of life, including students, staged demonstrations across the country for the 4th consecutive day on Thursday as anger mounted over the growing incidents of rape and sexual harassment of women.

According to reports, people in different parts of the country took to the streets and raised their voices demanding that rapists be given stringent punishment.

The public fury mounted in recent days after the recent gang-rape incident at Sylhet MC College and housewife’s molestation in Begumganj of Noakhali district.

In Dhaka, the students of Viqarunnisa Noon School & College took positions in front of its campus on Thursday and staged demonstrations demanding the toughest punishment of rapists.

Several hundred students thronged in front of the campus with placards and chanted slogans demanding steps to bring the rapists under the ambit of the law.

They also formed a human chain and left the place after one and a half and hours, said Monirul Islam, officer-in-charge of Ramna Police Station.

Besides, several hundred activists of different organizations, including Chhatra Union, Ahsanullah University of Science and Technology and the Bangladesh skateboarding community took positions at Shahbagh intersection demanding exemplary punishment and speedy trial for all the convicted rapists.

The protesters shouted slogans ''Hang the rapists', 'Break the hands of rapists'. They were carrying placards with different messages - ''No mercy to rapists'' and ''Please tell me, am I next?''

On Thursday, some students of left-leaning student bodies started protests in front of the National Museum at Shahbagh around 11.30 am.

The protesters also demanded the resignation of Home Minister Asaduzzaman Khan Kamal for his failure to stop rape across the country.

They announced that a mass rally will be held on Friday afternoon at Shahbagh to press home their demands.

Besides, a group of students, under the banner of ‘General students’ brought out a protest procession and formed a human chain in the Rajbari area.

They also formed a human chain at noon. They also demanded that the culprits be brought to book and put the rapists under crossfire.

In Faridpur, the district unit of Jubo Dal on Thursday formed a human chain on court premises in the district town protesting the recent incidents of rape and sexual harassment on women and children.

In Sunamganj, Sunamganj Reporters Unity on Thursday formed a human chain at Traffic Point in the district town.

In Bhola, a group of people under the banner of ‘Sacheton Nagorik Parishad’ formed a human chain in front of K Zahan Market in the district town at noon, protesting the recent rape incidents.

They also demanded the highest punishment of rapists.

In Jashore, Jashore Democratic Lawyers Association formed a human chain in front of the District Bar Association building around 12 noon.

They also vowed not to provide any legal assistance to rapists.