‘Imran’s Selectors’ Will Have to Answer for Country’s Situation Today, says Nawaz 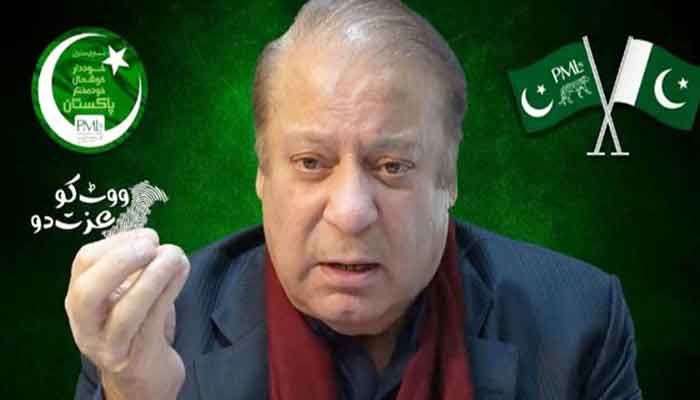 "On Thursday, PML-N supremo Nawaz Sharif demanded" Imran's selectors "to answer to the ongoing crises in the country, saying that his supporters" will not sit back "until they get one, DAWN reports.

At a convention of PML-N parliamentarians and ticketholders, Nawaz, who is currently in London, made the remarks in a virtual address, stating that the country was facing "defining moments."

The former prime minister, while commenting on the state of the economy and the challenges being faced by the masses, asked: "Who should I hold responsible for this? Just Imran Khan or those who are really responsible?"

"Imran's selectors, you will have to answer for this. You cannot go home without answering," Nawaz declared. "Without Pakistan's parliament, its institutions cannot operate. Even the judiciary cannot work. We will make you answer, we will not sit back until we get one."

He said that people in Pakistan were "crying" because of rising inflation and prices of power and gas.

"Have you thought about how they (people) are living? Was this the situation two years ago?"

The former premier regretted that no one had so far attempted to "diagnose the root cause" of the problems and political turmoil of the country and said that he had agreed to "identify" it without any "ambiguity" at the multiparty conference of the opposition parties held on September 24.

The former premier regretted that no one had so far attempted to "diagnose the root cause" of the country's problems and political instability and said that at the multiparty conference of the opposition parties held on September 24, he had decided to "identify" it without any "ambiguity"

"I know an overwhelming majority [in the army] sticks to constitutional boundaries, but there are few who have digressed. Those names are few, they can literally be counted on fingertips [but] they have defamed the entire army and that is not acceptable to me," the PML-N supremo said. "I respect my soldiers and generals, but I cannot respect those who do not respect the Constitution, who rig elections."

He also directed his party's parliamentarians to take a stand, saying that they were not "rented members".

"You (PML-N leaders) had won the election, but he was given victory. The tabdeeli person," Nawaz said, referring to PM Imran and added that those who "rigged" the 2018 general elections, had "violated the Constitution and committed a crime".

"We are not sheep that can be herded and if this has been happening [in the past], it will not happen anymore! We will make Pakistan a respectable country," he vowed and added that any member who "was scared should sit at home. We don't need cowards. You don't deserve to be in the assemblies if you are scared".

Nawaz also criticised the PTI government for "begging" other countries for money even though they had promised not to do so.

Nawaz also spoke about the Supreme Court's decision in 2017 to disqualify him in the Panama Papers case, in which he was found guilty of not declaring a receivable salary, saying that he "didn't understand what happened".

"Had there been a valid reason for my removal, I would have understood that I have been punished for a crime that I committed," he said. "I was disqualified for not taking a salary from my son.

"Why would I need an iqama? If Musharraf [had not] imposed martial law in 1999, I would not have had to leave with my family. To live there (UAE), I needed an iqama. I had to stay abroad for seven years," he told the session.

"Whether I draw a salary from my son or not, that is my choice. Is that a reason to expel me from the prime minister's office?" he asked.

He said that he have been observing how the country's condition had changed over the past two years, even when he was in prison in Pakistan, and regretted that after the tenure of his party, people's lives had become difficult.

"At a time when people have to eat roti with water, it becomes haraam for me and you to sit peacefully. If we don't speak, we will also be guilty."