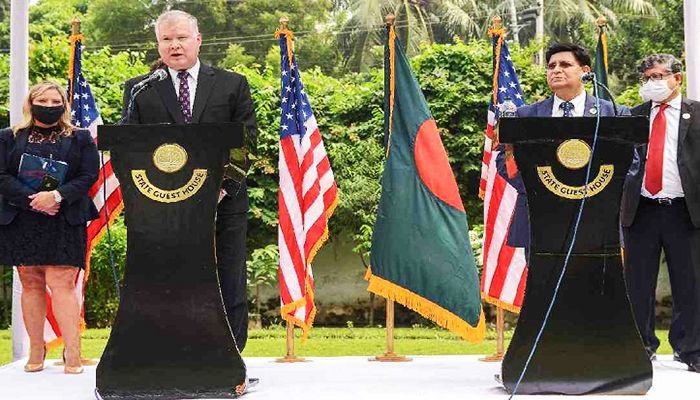 ﻿The United States considers Bangladesh as the centerpiece in its Indo-Pacific Strategy, said US Deputy Secretary of State Stephen Biegun on Thursday.

''Bangladesh's geostrategic location and continuous economic growth and stability make it more attractive for the US,'' he said at a joint press conference following a meeting with Foreign Minister AK Abdul Momen at the State Guesthouse Padma in the capital.

On extradition of Bangabandhu's killer Rashed Chowdhury, the US top diplomat said that this is entirely a legal matter and beyond the jurisdiction of the Department of State.

However, the Attorney General’s office is ''reviewing'' the case.

On this issue, Foreign Minister AK Abdul Momen said it's a matter of satisfaction that the US is reviewing the case of Rashed Chowdhury in regards to extradite the killer of Bangabandhu.

The US top diplomat arrived in Dhaka on Wednesday afternoon after a two-day visit to India. He will leave for the US tomorrow (Friday) morning.

He is scheduled to meet Prime Minister at the Ganabhaban.

At the meeting, they discussed trade and investment, the Rohingya crisis, extradition of Bangabandhu killer Rashed Chowdhury.

Bangladesh sought large investments in infrastructure, agriculture, IT, pharmaceuticals and energy and US assistance on Rohingya repatriation.

Stephen Biegun said the US has been providing humanitarian assistance to Bangladesh for the Rohingyas but it's not a sustainable solution.

The US will engage Myanmar on Rohingya relocation as well, he said. However, regional countries should work together to solve the crisis, he told reporters.