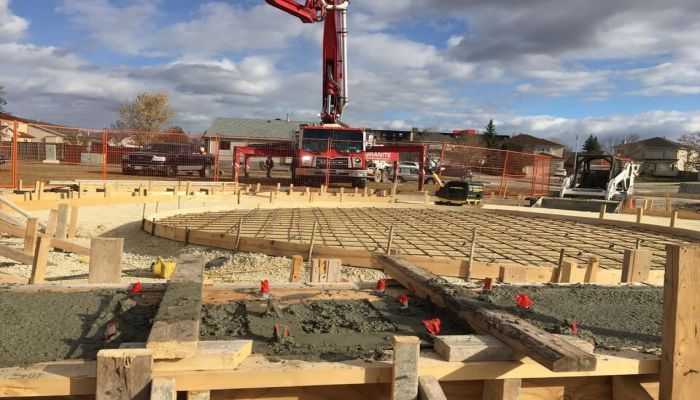 History is about to be written in Winnipeg, Canada. Construction of the first full-fledged Martyr's Minaret in North America is progressing rapidly in Winnipeg, the capital of Manitoba. It is expected that all the construction work will be completed by December. Temporary preparations have also been completed to organize the Ekushey Language Day celebrations of 2021 at the newly constructed Shahid Minar premises.

Kirkbridge Park in Winnipeg is a thriving community park. The park is located in an elite residential area not far from the University of Manitoba. A small postal pond [pond for sand dunes] adjacent to the park has been selected for the construction of the courtyard. This Shaheed Minar is the result of the sincere and relentless efforts of the Bangladeshis of Winnipeg over the years. The provincial government of Manitoba, the city authority of Winnipeg is bearing the lion's share of the cost of the project. There is also financial assistance from Bangladeshis. Entrepreneurial organization Manitoba Bangladesh Bhavan Corporation has provided a portion of the budget to Bangladeshis in Winnipeg through multiple fundraising events over the past few years. The construction cost of the square will exceed Tk 1 crore in Bangladeshi currency.

The main towers will be constructed of galvanized steel to keep the main structures winter-friendly and environmentally friendly. The area around the altar will also have an aesthetic mix of concrete and stone. The boundary of the courtyard will be covered with green winter tolerant shrubs. The main altar will also have a stone monument commemorating the Indigenous language of Canada. The city of Winnipeg is special for many reasons. The city is the largest of the three prairie provinces in Canada. More importantly, the city is the "Zero Point" of North America. Winnipeg is the focal point when drawing a circle around Canada and the United States. Another highlight of the city is that Winnipeg is home to the world's only human rights museum. Because of the museum, Manitobar human rights activists have begun to refer to Winnipeg as the "Geneva of Human Rights". The organizers believe that the International Mother Language Square will become a place of interest as well as a center of cultural activities.