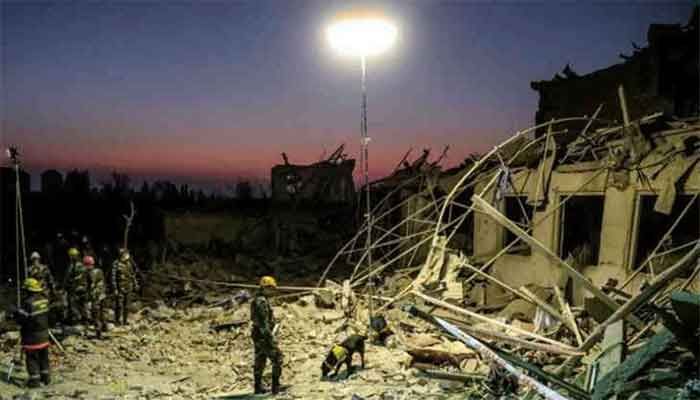 ﻿In the disputed region of Nagorno-Karabakh, Armenia has accused Azerbaijan of breaching a humanitarian ceasefire within minutes of its entry into force.

But an Armenian spokeswoman for the defense ministry said Azerbaijan had violated the ceasefire by firing artillery shells and rockets after just four minutes.

Azerbaijan is yet to respond to the allegations.

In line with agreements that led to a ceasefire being signed last weekend, the decision on the ceasefire was made. Despite the agreement, however, fights occurred.

Last month, fighting erupted over an area recognized internationally as part of Azerbaijan but administered by ethnic Armenians. Hundreds have died.

This is the region's worst violence since a six-year war over the area ended with a 1994 ceasefire.

Both nations continued to exchange charges earlier on Saturday over breaches of the Russian-brokered ceasefire negotiated last weekend, and concerns are likely to linger after the latest comments.

What is the latest agreement?

Both nations confirmed the humanitarian truce, although few other details were given.

The Foreign Ministry of Azerbaijan reported that the decision was based on statements made by the Presidents of the United States, France and Russia, representing the OSCE Minsk Community, a body set up in 1992 and chaired by the three countries to mediate the dispute between Nagorno-Karabakh.

Anna Naghdalyan, Speaker of the Foreign Ministry of Armenia, made the same comment in a tweet, adding that she welcomed efforts in the conflict zone to "ceasefire and de-escalate tension."

Russian Foreign Minister Sergei Lavrov, who negotiated last weekend's accord, spoke to counterparts in both countries on Saturday and said they needed to "strictly follow" the earlier agreement.

What is the latest on the ground?

Azerbaijan accused Armenia of a missile strike in the early hours of Saturday that killed at least 13 civilians and injured 45 in Ganja, a city far from the front lines.

A foreign ministry statement accused Armenia of "deliberate and indiscriminate targeting of civilians".

The assault was refuted by Armenian officials and Azerbaijan was accused of targeting residential areas.

Shushan Stepanyan posted a Facebook video that she said showed destruction in the Nagorno-Karabakh region, accusing the Azerbaijani Armed Forces of missile attacks on civilians in areas like Stepanakert, the capital of Nagorno-Karabakh.