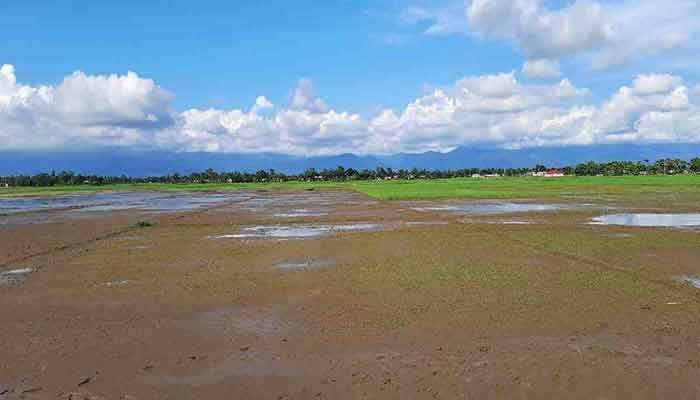 ﻿Farmers in the haor areas (wetlands) of the Sunamganj district are very worried these days. This is because they have not yet been able to plan boro paddy seedbeds, as the break caused by heavy downpours in the water canals has led to the inundation of farmland.

Farmers say that there is no way to drain the water from the haor, which is the biggest challenge for them to prepare the seed beds to plant the boro paddy this winter for the summer harvest. Seedbed finishing is the final step in the preparation of soil for seed crops, reports UNB.

They say that the government has already begun to distribute seeds to farmers, but the local authorities have yet to take any meaningful measures to put an end to the issue of waterlogging in the areas once and for all.

"Last year, we planted our saplings, but this year, because of waterlogging, we cannot ready our seed beds. There's no way to clear the water right now. If the authorities concerned do not take any immediate action, boro cultivation is to be delayed," says Abidur Rahman, a resident of Mallikpur Village. Abul Kashem from the same villages echoes similar sentiments. "Every year, the government spends money to build or repair sluice gates to save the residents of the haor areas, but it forgets to take some concrete steps to hold or drain out the excess rain water that causes waterlogging."

According to District Agriculture Extension (DAE) sources, the Department has set a target of 11,000 hectares under boro seedbed in the 2020-2021 fiscal year. In addition, under the annual crop cultivation programme, the DAE aims to cultivate the hybrid variety boro seedbed on 1,700 hectares, the Ufsi variety on 8,688 hectares and the local variety on 203 hectares on 11 upazilas.

If the seedbed goal works well, some 2.20 lakh hectares of land can be cultivated under boron. This will allow farmers to grow hybrid paddy on 42,510 hectares, Ufsi on 1,73,754 hectares and local varieties on 3,040 hectares of land. In addition, the Government has allocated a total of 4,565 metric tons of paddy seed to farmers.

Mizanur Rahman, Deputy Assistant Agriculture Officer of Muktikhola Block, says that this is the peak season for the development of long-term paddy varieties, and farmers are struggling to expand their seed beds due to waterlogged farmland. "If the water is not pumped out the farmers will be in crisis," he adds.

Mostafa Iqbal Azad, DAE District Training Officer, says, "Due to the late drainage of water from the harbour, farmers face some problems, but if the situation improves after a few days, the crisis will be over."

Sabibur Rahman, the executive engineer of Sunamganj Water Development Board, blames the heavy rainfall-induced flash floods for the problem. "The authorities concerned marked the water level of the haor areas to 5.49m on October 27, 2019, but this year it has risen to 5.80m," he says.

"Already, 31 vertical regulators, 25 fall boars and 19 sluice gates have been opened for draining out the water from the haor areas, while there are 200 canals inside these areas. If needed, we will cut dams," he adds.