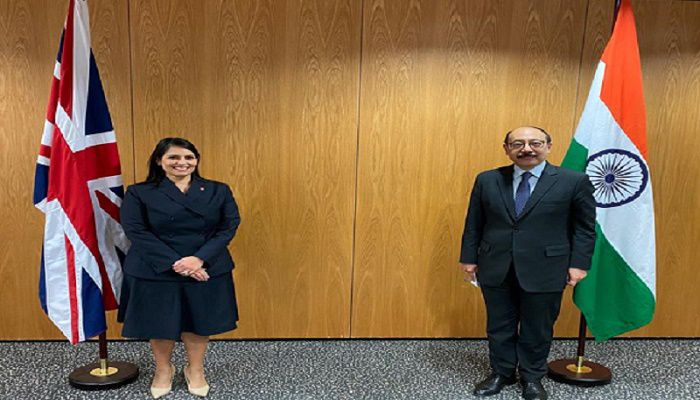 ﻿Indian Foreign Secretary Harsh Vardhan Shringla has placed great importance on Indo-Pacific countries, including Bangladesh, being a catalyst for all kinds of development and change in the 21st century.

Shringla came up with the call in a dialogue titled ''India’s Vision of the Indo-Pacific'' at the Policy Exchange think tank in London ending on November 4.

Apart from scholars, the dialogue was attended by members of an International Commission on the Indo-Pacific.

Report and recommendations of the Commission headed by Stephen Harper, the former Prime Minister of Canada, could feed into government thinking and shaping United Kingdom’s Indo-Pacific strategy.

In the 18-page speech, Shringla mentioned twice Bangladesh being an active partner of the socioeconomic changes in the region.

“We must not forget that many countries of the Indo-Pacific have suffered a history of colonialism,” he said, in an indirect indication of China’s Belt and Road Initiative projects.

“We need to be mindful not to embrace constructs that themselves create dependencies and skewed arrangements. These concerns are particularly relevant as the Indo-Pacific region puts its mind to supply chains resilience and diversification in the post-coronavirus period”

He also referred to Supply Chains Resilience Initiative (SCRI) India is working on along with Japan and Australia, adding that New Delhi along with G-20 partners is considering a proposal to waive debt repayments from smaller countries for 2020 at least. Prime Minister Narendra Modi is expected to attend the G-20 summit, being hosted virtually by Saudi Arabia on November 21-22.

Whatever the navigation map, the fact that the Indo-Pacific is the 21st century’s locus of political and security concerns and competition, of growth and development, and of technology incubation and innovation is indisputable, said Shringla.

“That is why a country like Germany, physically distant but an economic stakeholder in the Indo-Pacific, has released a strategy for the region. After France and the Netherlands, it is the third European country to do so. In India, we have noted with some satisfaction that our policy outlook has much in common with these documents.”

In the 21st century, the interconnectedness of the Indo-Pacific is finally coming into full play and motivating factor is the region’s emergence as a driver of international trade and well-being, he said.

The Indo-Pacific ocean system carries an estimated 65 per cent of world trade and contributes 60 per cent of global GDP. Ninety per cent of India’s international trade travels on its waters, he added.

“For us, and for many others, the shift in the economic trajectory from the Atlantic to the Indo-Pacific has been hugely consequential. The rise of China and the imperative for a global rebalancing have added to the mix. A rules-based international order is achievable only with a rules-based Indo-Pacific.”

Indian Foreign Secretary Harsh Vardhan Shringla, who was the country’s High Commissioner in Dhaka a few years ago, mentioned name of Bangladesh as major stakeholder in development, peace fostering and humanitarian activities twice in his speech in London

In the past six years, India has provided coastal surveillance radar systems to half a dozen nations – Mauritius, Seychelles, Sri Lanka, Maldives, Myanmar and Bangladesh, he said.

Defence training programmes have increased. Mobile training teams have been deputed to 11 countries – from Vietnam to South Africa, Sri Lanka, Bangladesh and Myanmar in our immediate neighbourhood, he added.

As the Covid-19 pandemic hit us earlier this year, India did what it could to support its friends. Rapid response medical teams were sent to countries as far apart as Kuwait and the Maldives, and on their request. Through the lockdown, food supply lines were kept alive for the Gulf nations as well as for smaller island states such as Mauritius, Seychelles, Madagascar and Comoros.

India has also promoted and contributed to infrastructure, connectivity, economic projects and supply chains in the region, always prioritising the needs of the host community and the ethic of equity, environmental sustainability and social viability.

Indo-Pacific region puts its mind to supply chains resilience and diversification in the post-coronavirus period. India is a party to several such conversations. For example it is working with its Japanese and Australian friends on the Supply Chains Resilience Initiative.

About Indian policy, he stressed the country’s commitment to promote and contribute to infrastructure, connectivity, economic projects and supply chains in the region by always prioritising the needs of the host community.

“This aspiration depends on securing end-to-end supply chains in the region; no disproportionate dependence on a single country; and ensuring prosperity for all stakeholder nations. An Indo-Pacific guided by norms and governed by rules, with freedom of navigation, open connectivity, and respect for the territorial integrity and sovereignty of all states, is an article of faith for India.”

A call to UK

“The UK, we hope and expect, will be next on the list, and too will finalise its Indo-Pacific strategy soon. Given this country’s characteristic wisdom and prodigious institutional memory, we hope too that the UK’s strategy will approximate India’s own and long-standing Indo-Pacific,” Shringla.