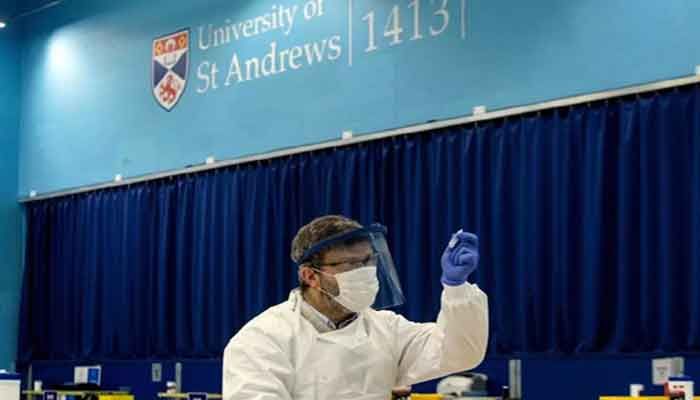 As an unusual term comes to a close and Christmas holidays draw closer, students at St Andrews University in Scotland filed in and out of a sports hall that was converted into a mass coronavirus testing centre.

“It’s a huge piece of mind just to be able to go home and be with my family, knowing that everything is safe,” Fiona Waddell, a 19-year-old psychology student said before the centre opens for testing on Saturday.

“We’re lucky enough that we are able to be together at Christmas and I just don’t want anything to compromise that,” she told AFP.

The center has been set up by the centuries-old university on the northeast coast of Scotland as part of a roll-out of Covid-19 exams for students around Scotland before the end of the year.

The facility, where students self-test with one of the million lateral flow test kits provided by the UK government to Scotland, has a capacity of 1,500 students every day.

It will remain open until December 18 with students who plan to return home for the festive break asked to take two tests three days apart.

In London, the UK government, which sets England's health policy, and the devolved administrations in Scotland, Wales and Northern Ireland have announced proposals to encourage students to return home for Christmas.

Everyone needs to minimize the risk of the virus spreading as they travel.

After taking coronavirus exams, students in England and Wales have been asked to return home during a week-long travel window.

In Scotland, a staggering return is planned across the seven-day window.

Alastair Merrill, vice-principal for governance at St Andrew's, said the asymptomatic testing initiative meant when students returned home they can “keep their families and communities safe when they do so”.

Within 30 minutes, findings from the lateral flow experiments are seen and analyzed and submitted to students within 24 hours.

Some 80 percent of students are preparing to go home for the holidays, a study by the St Andrews Students' Association found.

Rebecca Clunie, a 22-year-old chemistry student, who swabbed her throat and the back of her nose to self-administer the test, said taking the test earlier meant she could self-isolate before going home — if that was necessary.

“Even if it is positive I’ve still got time to self-isolate before I have to go home,” she explained.

Anna-Ruth Cockerham, 20-year-old studying mathematics, said it was going to be good to get home after a term where social interaction had been limited because of the virus.

“I think as well many students, myself included, haven’t had the opportunity to really mix with other people so to be able to go home and see your family is a good opportunity,” she added.