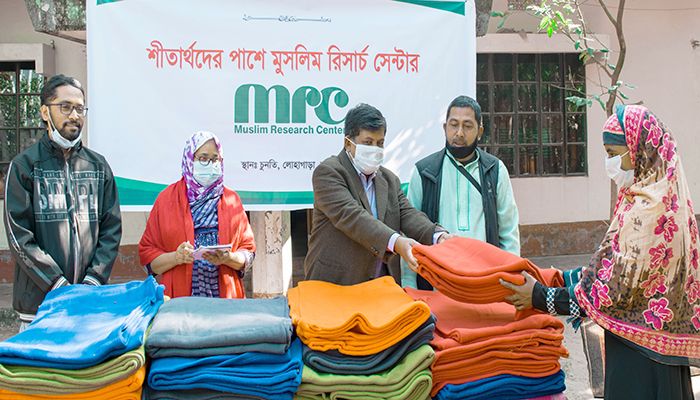 Compared to other parts of the country, winter is felt severely in the northern districts as they are closer to the Himalayas. As a result, the destitute and less fortunate people have to suffer more due to the severity of a cold. Taking this into consideration, the Muslim Research Centre started distributing warm clothes in the northern districts earlier this month. In the second phase of the program, winter clothes have been distributed in Chunati union of Lohagara upazila of Chattogram.

Speaking on the occasion, Reaz Ahmed Siddiqui Chief of Chattogram District of the organization, said, “It is the religious duty of every solvent Muslim to stand by the disadvantaged sections of the society in any distress including natural disasters. With this sense of responsibility, we are trying our best to stand by the helpless people of the country.”

Adding to the words of the Chattogram District Chief, Convener Mohammad Sayed Uddin Siddique said, “Honestly, The way Muhammad Rashid Al Mazid Khan Siddiqi Mamun, the founder of MRC, is silently working in the service of humanity is one of the main goals of establishing MRC. We have been engaged to serve humanity since its inception and to fulfill this goal inshallah this practice will continue in the future as well.”

In addition to this, Founder of Muslim Research Centre Muhammad Rashid Al Mazid Khan Siddiqi Mamun has been providing various types of assistance including winter clothes at personal and institutional level. If any person or organization need help in this regard, they can apply in person as well as on the MRC's own website www.muslimresearchcentre.com and on social media.

The Muslim Research Centre (MRC) was officially launched this year with the aim of conducting advanced research on the Qur'an and Hadith, developing Islamic institutions and standing by the people at risk. Since its inception, the organization has been providing useful information about Islam for everyone using its own website and social media platform.