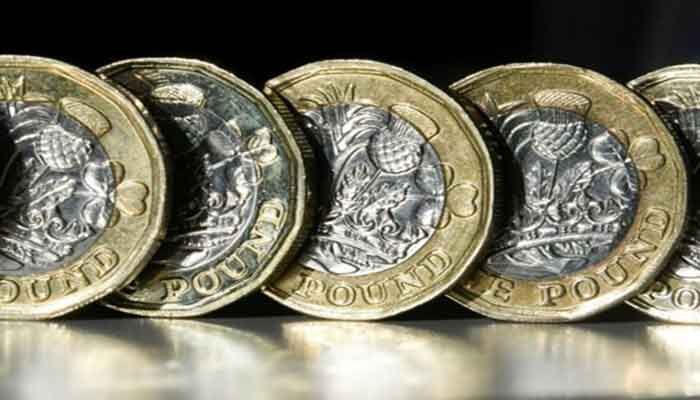 The British pound resumed its frantic two-month rise against the euro and the dollar, hitting new peaks on Monday as a sign of traders' excitement for the country's vaccine roll-out.

Just before Christmas, investors were worried that the nation would leave the European single market without a post-Brexit trade deal, reports AFP.

But since December, the pound has risen by more than 5% relative to the euro and the US dollar, making it the top performer in major currencies.

The leap is due to the number of people vaccinated: according to the government, one adult in three has got the first dose, representing more than 17.5 million people.

Another reason for optimism is Prime Minister Boris Johnson’s publication Monday of a “cautious but irreversible” roadmap to ease lockdown restrictions by July.

“After a year in which the government’s reputation was soured by a string of policy U-turns, the UK has made good decisions regarding vaccines,” Jane Foley, head of FX strategy at Rabobank, told AFP.

“The vaccine rollout has improved the economic outlook in the UK relative to elsewhere, especially in the EU,” Capital Economics added in a note.

“Markets are still adjusting to the fact that the Bank of England is unlikely to implement negative rates for now,” added analysts at Swiss bank UBS.

Like other central banks, the Bank of England introduced a record low interest rate of just 0.1% to cushion the economic effects of the pandemic.

However, traders were primarily concerned that a negative rate would be introduced, such as the European Central Bank or the Bank of Japan.

At its last monetary policy meeting, the bank took that option off the table until August, and governor Andrew Bailey said it might not be implemented then either.

As a result, forex traders began to bid up the pound against the dollar and the euro.

Unlike the single currency of Europe, the strength of which weighed on exports, the pound is only returning to a relatively low level.

The British currency is now 12 per cent lower relative to the euro and 6 per cent lower than the dollar, compared to the pre-Referendum to the Seismic breeze in June 2016.

“A stronger pound is another headwind for UK exporters and provides some small relief for households,” noted Paul Dales of Capital Economics.

“But it’s not going to make a big difference to the economy.”

Foley warned that “there are speed bumps ahead”.

The effectiveness of vaccines against coronavirus variants and the strength of the UK recovery will determine if the pound remains at its current levels or not, she forecast.

And another risk looms on May 6 when elections for the devolved parliament in Scotland could give fresh impetus to the pro-independence movement, she added.