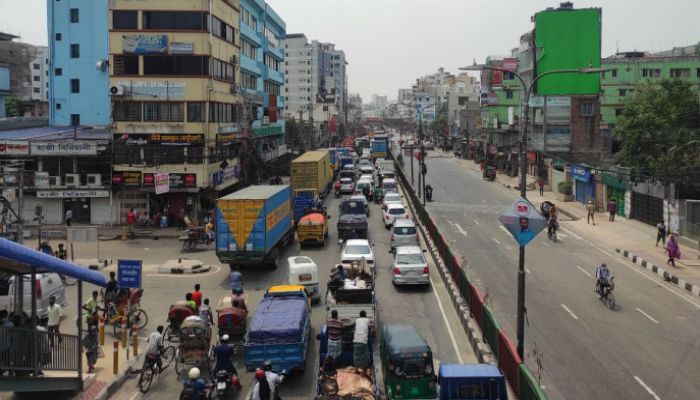 ﻿Unlike the first day of the ongoing lockdown, Dhaka witnessed huge traffic gridlock at different intersections on the second day of the 7-day lockdown, imposed nationwide as Covid-19 has taken a dangerous turn in the country.

Visiting several spots, The Business Standard correspondents witnessed that police checkpoints are in some cases aiding the jam.

The police checkpoint near the airport road was seen stopping almost every car to inquire about movement purpose subsequently increasing the congestion.

Another similar check post in front of Kurmitola General Hospital caused the traffic to slow down and create a tailback in the area.

Despite police having interrogated commuters about movement purposes they rarely sought government-issued passes for checking, alleged some of the gridlocked passengers.

"The lockdown restrictions are being imposed loosely today. There are lots of people on the streets so the police inquiries have also decreased. I didn't see anyone asking for a pass," said Mahbub Alam Shoyeb, one of the commuters stranded in Pragati Smaroni.

A huge tailback also formed in front of the Bangladesh Shooting Federation building leading all the way to Police Plaza bridge for police checking and verifying commuters.

"People who cannot show a valid reason for coming outside are not being allowed to pass the check post," said one of the officials working there.

Jisan Haque, a regular commuter and government service holder said that the number of people moving outside increased Thursday comparatively.

A traffic police official seeking anonymity said compared to yesterday the number of people neglecting the lockdown has increased because a number of factories and banks are still open.

Assistant commissioner of DMP's Mohakhali traffic division Md Shamsul Islam said since yesterday was a national holiday the number of people outside has increased today comparatively.

"The influx today is almost three to four times higher than yesterday," he told The Business Standard.

Besides, Banks will remain open till 1 pm to facilitate financial transactions. However, the bank authorities are allowed to conduct internal official activities until 2:30 pm.

People are collecting movement passes in full swing as some 2.5 lakh passes were issued till 7 am Thursday since the app was launched a day ago.

The movement pass launched by Bangladesh police is the only way to go out in case of any emergency during the seven-day strict lockdown.