Mueller on the Mark As Germany Thrash Latvia 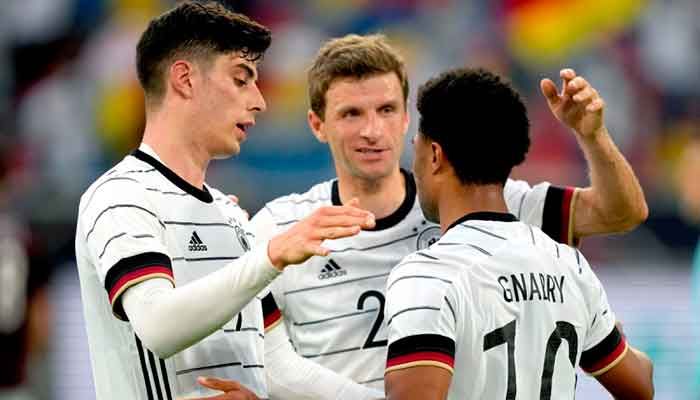 ﻿Thomas Mueller scored his first international goal for three years on Monday as Germany crushed minnows Latvia 7-1 in their final warm-up friendly before the Euro 2020 finals.

Latvia, ranked 138th in the world, rarely got out of their half as Germany tuned up for their opening game of the European Championship against world champions France in eight days time in Munich, reports AFP.

After a two-year exile from international football, 2014 World Cup winner Mueller got on the scoresheet while Premier League stars Ilkay Gundogan and Timo Werner also found the net in the rout.

“The result wasn’t the most important thing, it was more about the way we wanted to play football and implement things,” said Mueller, who claimed his first Germany goal since March 2018.

“It felt good, it was a convincing win, but we know that France will be a different proposition, that’s clear.”

Germany captain Manuel Neuer was applauded onto the pitch by his team-mates before kick-off as he became the first goalkeeper to make 100 appearances for the national team.

The 35-year-old veteran had one of the quietest nights of his career in Duesseldorf.

He was largely untested until Latvia midfielder Aleksejs Saveljevs caught the German defence napping with a consolation goal 15 minutes from time.

Germany head coach Joachim Loew made four changes from the side held to a frustrating 1-1 draw with Denmark.

Chelsea’s Champions League winner Antonio Ruediger came into the defence with his club team-mate Kai Havertz, who played the first half, impressing up front.

Havertz ghosted through the Latvia defence to set up the opener as left-back Robin Gosens claimed his first international goal, then 86 seconds later Gundogan crashed in the second.

Germany were 3-0 up inside 27 minutes when Mueller hit the net for his 39th goal in 102 caps for Germany.

It was 5-0 at the break as Latvia goalkeeper Robert Ozols fumbled the ball into his own net, then Serge Gnabry volleyed into the top corner just before half-time.

Werner replaced Havertz for the second half and fired home between Ozols legs with 50 minutes gone.

The Germans were caught napping when Saveljevs’s superb shot flew past the diving Neuer, before Sane made amends for his earlier miss by tapping home’s Mueller’s pass.

The win was a timely confidence booster on the eve of the Euro 2020 finals, but Germany can expect much harder games against France and reigning European champions Portugal in Group F.

“We’ve kept things free until the middle of July – anything can happen,” joked Mueller, with the Euro 2020 final scheduled for London’s Wembley Stadium on July 11.