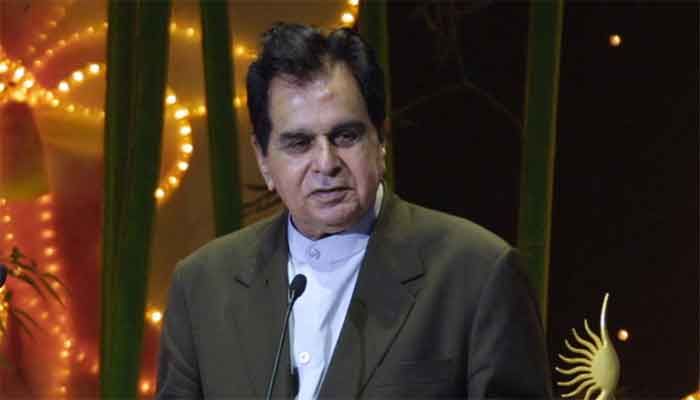 In this photo taken on May 22, 2004, Indian veteran actor Dilip Kumar speaks at the podium for his award for outstanding achievement in Indian cinema at the 5th International Indian Film Academy Awards in Singapore. ||Photo: AFP

﻿Dilip Kumar, who died on Wednesday aged 98, was a shy Muslim fruit seller who fought early failure and family disapproval to become one of Bollywood's most accomplished and respected film stars.

With Dev Anand and Raj Kapoor, he was one of the three big names who dominated the golden age of Indian cinema from the 1940s to the 1960s, enjoying a career spanning more than 50 years and nearly 60 films, reports AFP.

Nicknamed "The Tragedy King" because of his brooding good looks, tousled hair and deep voice, he played the lead in some of the Indian film industry's most commercially successful films of the period, earning him iconic status.

But although a Bollywood legend, he missed out on international fame after turning down the chance to play Sherif Ali in David Lean's 1962 classic "Lawrence of Arabia". The part went to an Egyptian actor, Omar Sharif.

Dilip Kumar was born Yusuf Khan on December 11, 1922 in Peshawar, then part of British-ruled India. His father was a fruit merchant who took his family to India's entertainment capital in the 1930s.

But the son turned his back on the chance to take over the firm when the actress Devika Rani spotted him on his father's fruit stall in the then Bombay, leading to a part in his first film, "Jwar Bhata", in 1944.

Rani persuaded him to change his name, so he chose Dilip Kumar, allowing him to hide what he was doing from his disapproving father.

Although "Jwar Bhata" flopped and leading film magazines criticised his performance Kumar was undeterred and eventually broke through with the 1946 film "Milan".

Among his most remembered roles was in the lavish historical romance "Mughal-e-Azam", based on the life of one of India's great Mughal princes.

The movie, released in 1960, was eight years in the making and cost a mind-boggling 15 million rupees, but soon became one of Bollywood's biggest-grossing films of all time.

Kumar, who cited Hollywood greats Marlon Brando, Gary Cooper and Spencer Tracy as influences, later won acclaim in 1964 for the nationalistic "Leader", screened against a backdrop of recent wars against China and Pakistan.

He even took a five-year break after a string of flops, returning in 1981 with the hit "Kranti" (Revolution) and a part alongside Bachchan in "Shakti" (Strength) the following year, plus a string of character roles.

After a series of badly-received films, he took up a more active role in politics in 1998 and worked to end the feuding between India and Pakistan.

Unlike many actors who appeared in hundreds of films, the versatile Kumar carefully selected those, by Indian standards, which only increased his stature in the fiercely competitive industry.

In 2006 he accepted a lifetime achievement award at India's National Film Awards in recognition of his contribution to Indian cinema.

Yet he still admitted that he was baffled at his success.

"Honestly, I've still to figure out how an intensely shy young man called Yusuf Khan became the actor Dilip Kumar," he told The Hindustan Times in an interview to mark his 85th birthday.

Kumar, who had struggled with ill health in recent years, married the actress Saira Banu in 1966 when she was 22 years his junior.

His death was announced on Twitter "with a heavy heart and profound grief" by family friend Faisal Farooqui.