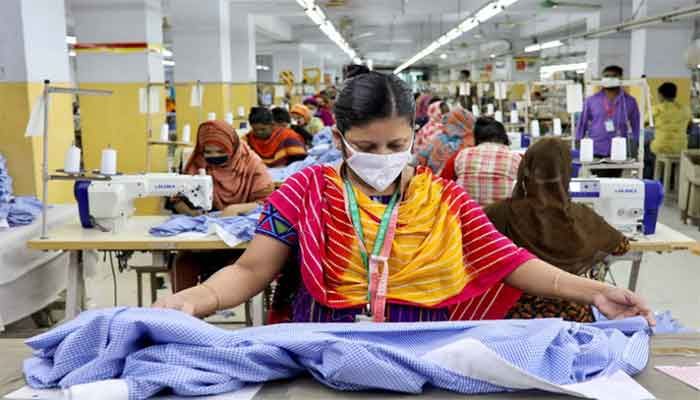 A woman works in a garment factory, as factories reopened after the government has eased the restrictions amid concerns over coronavirus disease outbreak in Dhaka, Bangladesh, May 3, 2020. || Photo: Reuters

With its political continuity and well-thought-out developmental plans alongside economic sustainability, Bangladesh not only stands out in South Asia but also in other developing countries, says Mongolian Ambassador to Bangladesh G Ganbold.

“I think these accomplishments of sustainable economic growth are internationally acknowledged,” Ambassador Ganbold told UNB in an interview noting that there are many scopes for further broadening bilateral relations between Bangladesh and Mongolia in the areas of cultural exchange, trade and economic cooperation.

He said Bangladesh, as an emerging and growing economy, is accomplishing truly impressive socio-economic growth under the dynamic leadership of Prime Minister Sheikh Hasina.

“We’re both Asian and developing countries with parliamentary democracy and market economy,” he said, adding that Mongolia was one of the first five countries that recognized Bangladesh’s independence because of which some countries even went to terminate its diplomatic relations with Mongolia.

Mongolia also co-authored the UN resolution together with India and Bhutan in support of Bangladesh.

“We’re enjoying excellent bilateral relations ever since then and have successfully been collaborating on the international arena,” he said, extending his warm greetings to Bangladeshi friends on the occasion of the 100th anniversary of Mongolia's National Day that falls on July 11.

Responding to a question, the Ambassador said being developing countries, they both have the same challenges like benefits of sustainable economic growth need to be seen through the welfare of people.

He said Mongolia is richly endowed with natural and agriculture-based resources and light industries while Bangladesh is well known for its textiles and readymade garment and pharmaceutical industries.

“Therefore, we can learn from each other’s experience and also promote mutually beneficial trade and economic relations. With the advent of modern means of transport and ICT tourism is growing exponentially,” said the Mongolian envoy.

He said, “We all know this challenge of pandemic alike the earlier ones will be extinguished with our combined efforts. Once, good days are coming.”

The Ambassador said tourism has multiple significance in discovering new land and meeting with people and building meaningful collaboration across the globe.

“Our economies are still dependent on climate and calamities thus, we need to intertwine our efforts against adverse effects of climate change and natural disaster risks like earthquake, flood, drought, typhoon or zud (snow famine) and industrial accidents with mass implication.”

With the completion of construction of a new airport and emerging new hotels, Mongolia expects their number to grow up to 10 lakh within the next few months.

“Mongolia enjoys friendly relations with all neighbouring countries and is known as the shortest route-binding Asia with Europe,” said the Ambassador.

Talking about similarities between Bangladesh and Mongolia, he said from a young age they were reading renowned literary figure Rabindranath Tagore and through his works got acquainted with hard-working and proud Bengali people.

“We’re from a landlocked country so perceive Bangladesh as an amazing land of lakes, and experienced bridge and boat- builders. We need to encourage more cultural exchanges and tourism so that our two countries know each other more closely and benefit from their excellent bilateral relations,” he said.

The Ambassador said their people are similar with their openness and hospitality and they are eager to learn and hardworking. “Youth delegations and students’ teams need to be exchanged on a reciprocal basis to let them become acquainted with one another more closely.”

The envoy said he visited several museums, historical and sightseeing places in and around Dhaka like Lalbagh, Tajhat palace, Cox’s Bazar, National Museum and Sangsad Bhaban. “Based on my limited experience, I’ve got the impression that Bangladesh is a land of bridges, and boat builders.”

“I wish to arrange an exchange of folk arts troupes which are truly fascinating and represent their respective cultures,” he added.

The Ambassador wants to visit the site of the boat-building workshop, and see how they build many different boats.

“Varieties and craftsmanship of boat construction in Bangladesh are really amazing! They’re indeed tangible heritages which ought to be preserved and further promoted as a national brand of tourism and sports.”