To Track Elephants, Scientists Keep an Ear to the Ground 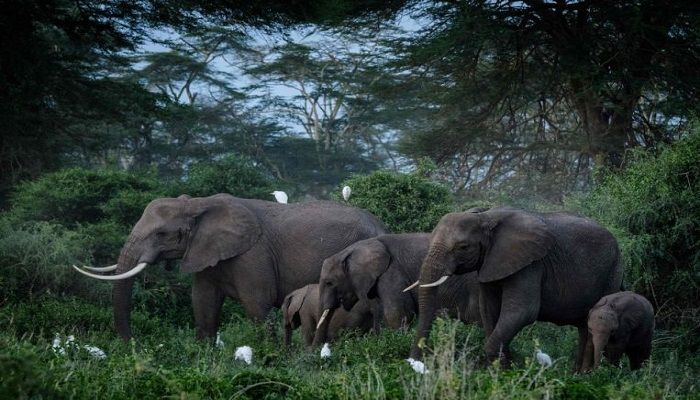 ﻿﻿The "mini earthquakes" that elephants make by both walking and vocalising are not only a way to communicate with each other but can be used to track their movements, according to a study published Wednesday.

African elephants not only make their presence known with a resounding trumpet, they also create powerful "rumbles" with their vocal chords that are at such a low frequency they are almost inaudible to the human ear, reports AFP.

These rumbles create sound waves that travel not only through the air but also -- because of the elephant's weight -- through the ground.

And these rumbles are thought to carry a wealth of information.

"Elephants use many different vocalisations in a variety of contexts, for example mating, greeting, or warning each other of an imminent threat," said Michael Reinwald, of the University of Oxford's Department of Zoology, who led the study published in the journal Royal Society Interface.

They really seem to be saying a lot!

The researchers monitored African elephants in Kenya by listening for their vocalised rumbles using microphones and seismometers -- often used for measuring earthquakes and explosions.

Reinwald said the elephants "generate 'mini earthquakes' with every footstep but also when they rumble", allowing the researchers to record the sound waves at distances of several hundred metres and then estimate their position based on this data.

They found seismic recordings gave slightly more accurate results than microphones, which they said suggests the potential of a new method of tracking wildlife through "seismic monitoring".

Previous research has shown that elephants react to just the seismic component of these rumbles, although it is unclear how important these are compared to the acoustic sounds.

There are two main theories for how the elephants are able to hear these low frequency sounds.

They may detect the sound waves using sensors in the skin of their feet, or through bone conduction -- meaning the wave travels up through their legs and to the middle ear.

Reinwald said one of the challenges of the research, which was carried out with the charity Save the Elephants as well as the Mpala Research Center, was the raucous calls of wildlife around the watering hole where they set up their equipment.

"It was also a real challenge to protect all the equipment from everything from walking elephants to curious monkeys to nibbling rodents," he said.

He said seismic monitoring could provide an alternative when microphones and camera traps are affected by bad weather or natural obstacles.

And the researchers hope that seismic monitoring might help scientists decipher what messages the elephants are sending, by helping to track what types of rumbles they use in different environments and social contexts.

"Seeing that seismic rumbles contain a lot of information, despite the solid material that these waves pass through, is quite surprising and suggests that elephants might use these waves to communicate over great distances,’’ Reinwald said.