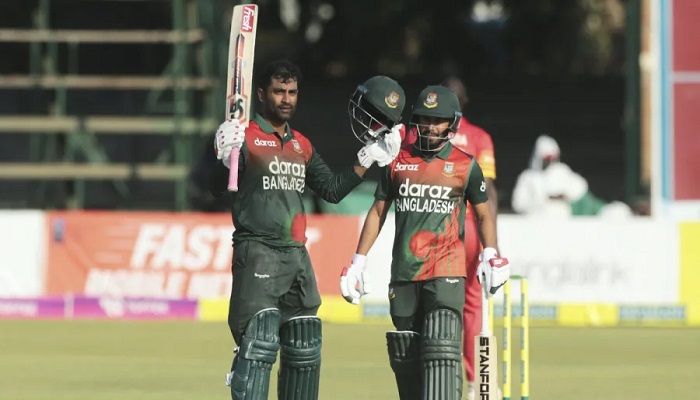 Captain Tamim Iqbal led from the front with a scintillating century as Bangladesh completed a clean sweep of Zimbabwe. Photo: Collected)

Captain Tamim Iqbal led from the front with a scintillating century as Bangladesh completed a clean sweep of Zimbabwe, recording a facile five-wicket victory in the third and final game at the Harare Sports Club today.

Zimbabwe posted a daunting 298 before being all out in 49.3 overs but Bangladesh rode ODI captain Tamim Iqbal's 112 runs to knock off the target with 12 balls to spare, making 302-5.

Tamim struck eight fours and three sixes in his knock for which he played just 97 balls.

Bangladesh won the first match by 155 runs, thanks to Liton Das's 102 runs knock and second one by three-wicket when Shakib Al Hasan led the charge with a brilliant 96 not out.

And it was day of Tamim, who brought up his 14th century in ODI cricket, playing through his knee injury and extended Bangladesh's winning streak against Zimbabwe to 19. It was also Bangladesh's 50th victory against the Southern African nation, reports BSS.

In pursuit of the big chase, Bangladesh got a good start from Tamim Iqbal and Liton Das, who shared 88 runs in just 13.2 overs. It was only broken when Liton perished to sweep shot to be out on 32. Tamim by then pushed Madhevere square for a single to reach his half-century off 46 balls.

Shakib and Tamim further bolstered Bangladesh's position, with a 59-run partnership. Shakib was out on 30 after being undone by a Luke Jongwe slower.

Tamim who became more aggressive after his half-century completed his 14th ton off just 87 deliveries, slashing Tendai Chatara for a boundary through mid-off.

But Zimbabwe suddenly cracked the game open, thanks to Donald Tiripano, who struck in twice in consecutive delivery to take the wicket of Tamim for 112 and Mahmudullah for duck on his 200th ODI.

Nurul Hasan Sohan and Mohammad Mithun added 64-run for the fifth wicket stand to help the side hit back and take on the verge of the victory. Mithun was dismissed on 30 but Sohan took the side, hitting an unbeaten 45 off 39, with six fours.

Afif Hossain who ensured the victory with consecutive six and four was not out on 26 off 17, striking three fours and one six. Earlier, Zimbabwe batsmen came up with a spirited performance as they put up a total closer to 300.

Regis Chakabva who opened the innings paved the platform of the big total, hitting his career-best 84 off 91, that included seven fours and one six. Utilizing that platform to good effect, Sikandar Raza and Ryan Burl hammered 112 off just 80 for their sixth wicket stand to help the side propel past 300.

Burl also registered his highest score in ODI cricket, clobbering 59 off 43 which studded with four fours and as many sixes. Raza however blasted 57 off 54, clattering seven fours and one six. Decision to open the innings with Chakabva was a masterstroke as Zimbabwe top order struggled to make impact against Bangladesh. After they were asked to bat first, Zimbabwe made a sedate start before Shakib Al Hasan broke through with the wicket of Tadiwanashe Marumani for 8.

Chakabva and captain Brendan Taylor kept the side stay in the contest with a 42-run partnership and looked dangerous in the process. However Mahmudullah Riyad struck twice to help the side claw back into the contest, removing Taylor (34) and Dion Myers (34). Mustafizur Rahman then took the scalp of Wessley Madhevere (3) who made half-century in the last match.

Taskin Ahmed however got the prized scalp when he dismissed Chakabva as Bangladesh looked to take the control. But the joy was shortlived as Raza and Burl came up with whirlwind batting to take Zimbabwe closer to 300.

Mustafizur then came back to break the dangerous 112-run partnership, getting rid of Raza before Saifuddin, who was bowling waywardly took three wickets in the penultimate over including the one of Burl to make it sure that Zimbabwe won't go past 300 runs mark.

Mustafizur and Saifuddin ended with three wickets, giving away 57 and 87 runs respectively. Mahmudullah Riyad took 2-45 while Shakib Al Hasan and Taskin picked up one wicket apiece.