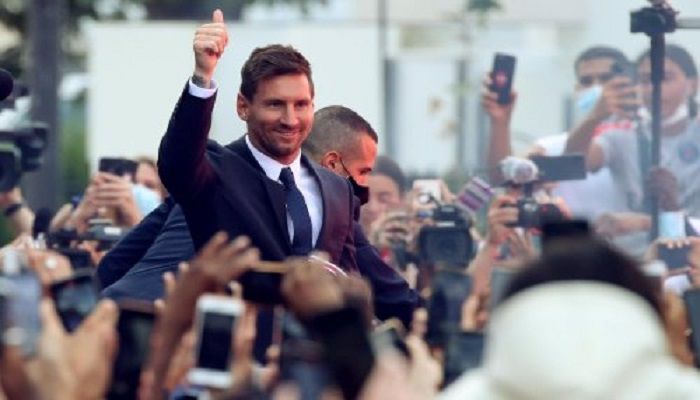 ﻿Even Lionel Messi seemed wowed by the power of Paris Saint-Germain’s new strikeforce, as he described the prospect of combining with Neymar and Kylian Mbappé as “madness”. In scenes very different to his tearful adieu to Barcelona three days earlier, the Argentinian was unveiled by his new club at a press conference at the Parc des Princes on Wednesday while a large and giddy crowd gathered outside to sing hymns of praise.

“The reception from the people of Paris has been amazing, I will try to live up to your expectations,” said Messi, who felt “incredible happiness” at joining a team that he believes can help him win his fifth Champions League and his first since 2015. Asked, in particular, about playing with Neymar and Mbappé, he replied: “It’s madness to be able to work with such great players on a daily basis,” adding that his admiration was not confined to those new teammates, since Sergio Ramos, Georginio Wijnaldum, Achraf Hakimi and Gianluigi Donnarumma have also joined this summer.

“PSG have made spectacular signings on top of the players that were already here,” Messi said. “I’m eager to get playing and I’m going to be doing it alongside some of the best players in the world. It’s going to be a marvellous experience every day. I hope I can continue to win titles. I have the same hunger as when I was younger.”

He said he was not sure when he would be ready to play, explaining: “I have been inactive for the last month so I basically have to do a pre-season by myself.”

PSG’s president, Nasser al-Khelaifi, said that Messi’s arrival should help convince Mbappé to pledge his future to the club. The Frenchman has resisted attempts to secure him to a new contract, with his deal expiring next year. Khelaifi said he expected Mbappé to stay because “now he has no excuse to do anything else”.

Khelaifi also said Messi’s arrival would generate enormous revenue for PSG, suggesting those benefits would help the club to comply with financial fair play regulations. Asked specifically how the club that already offers huge salaries could afford to hire Messi on an annual wage of nearly £30m for at least the next two years, Khelaifi thanked the journalist for asking “a very great question” before replying: “We have always followed FFP regulations from day one and we always will. Before doing anything strategically we look with our commercial, financial and legal people.

“We said if we have the capacity to sign him, we will do it. If not, we’re not going to sign him. What Leo is bringing to the club is huge and what the media have to focus on is not only the negative side but also there are a lot of positives Leo is bringing in terms of the commercial and social media. He’s a big asset for the club. It’s been an unbelievable three days [since reports of Messi’s arrival emerged]. If we give you some numbers, you are going to be shocked.” He added with a chuckle: “I hope Leo will not ask for more salary now … but we will always follow FFP regulations.”

Khelaifi said PSG’s aim was to win “every match and every trophy … but we have won nothing yet; now is the time to work, work, work. To win trophies you have to have a winning mentality and discipline.” On a day when superlatives were not always deployed with rigour, Khelaifi hailed PSG’s manager, Mauricio Pochettino, as “the best coach in the world”.

Messi admitted that Pochettino was a factor in luring him to Paris. “The fact we are both Argentinian helped,” he said. “I’ve known him for a long time and we have always got on well. As soon as I heard the move was possible, I spoke to him right away.”

He also expressed excitement about playing with Marco Verratti, saying he had been hoping for years that Barcelona would sign him. In an observation that must have provoked grimaces at the Nou Camp, Messi said: “We wanted to have him for a long time and now it’s the opposite – I have come here to play with him. He is a phenomenon. The players here are the best in their positions in the world.” Then, fittingly for the day that was in it, he added what may be the biggest understatement in football history: “I’ve come to add my two pennies’ worth.”