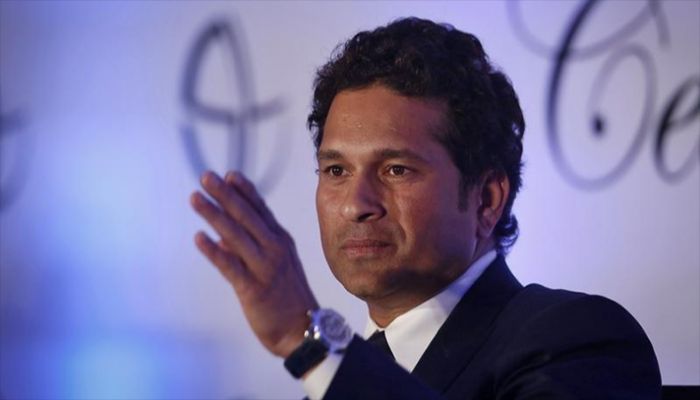 Sachin Tendulkar gestures as he speaks during a news conference a day after his retirement in Mumbai November 17, 2013. || Reuters Photo: Collected

Indian cricket superstar Sachin Tendulkar, who has been a member of the Upper House of Parliament, along with members of his family, figures in the Pandora Papers as Beneficial Owners of an offshore entity in the British Virgin Islands (BVI) which was liquidated in 2016.

Sachin, with wife Anjali Tendulkar and father-in-law Anand Mehta, as per an investigation of records of Panama law firm Alcogal which are part of Pandora Papers, are named as BOs and directors of a BVI-based company, Saas International Limited, reports The Indian Express.

The data is part of documents from Alcogal with their company being incorporated by LJ Management (Suisse).

Saas’s first reference in the Pandora records dates back to 2007 and the most detailed set of documents, along with financial benefits for the company’s owners, are available from the time of liquidation of the company in July 2016.

While there are no details of buyback of the remaining shares, the value of 90 shares can be pegged at $8.6 million (roughly Rs 60 crore).

The date of liquidation of Saas International Limited is significant as it came three months after the Panama Papers expose.

In Alcogal spreadsheets, Sachin Tendulkar and Anjali Tendulkar also figure in logs where they are categorised as Politically Exposed Persons (PEPs).

In one registry of PEPs, Sachin Tendulkar is listed on account of him being an MP and is put in the “high risk” category.

Another review of Sachin and Anjali’s PEP status was done in May 2016 two months prior to the winding up of Saas International Limited.

Sachin Tendulkar’s tenure as nominated member of the Rajya Sabha was from 2012 to 2018 and for four of these years, his BVI entity was registered and running with Alcogal.

As per regulations, nominated members of the Rajya Sabha are not required to submit their annual list of assets and liabilities as other elected MPs need to.

In the sets of data on Saas International Limited, its MoA states that it was a company limited by shares and was authorised to issue 50,000 shares with par value of $1 each. Another company, by the name of Cellar Limited, was appointed its secretary.

Also, that subject to legislation of the BVI, the company could “carry on or undertake any business or activity, including trading of any commodities or goods…”

At the time of its liquidation, Panamanian national John B Foster was appointed as the company’s “voluntary liquidator.”

There is also a certificate of solvency stating that the value of the company’s assets equals or exceeds its liabilities. The final date of dissolution of the company is given as August 31, 2016.

The shareholders’ resolution for dissolution is signed by all three of its shareholders — Sachin Tendulkar, Anjali Tendulkar and Anand Mehta.

As per regulations of Mutual Legal Assistance (MLA) Act, 2003, there are also details about where the “location of records and underlying documentation” for Saas International Limited will be after its liquidation.

The certificate, dated July 15, 2016 (the day the liquidation was initiated), shows that the records would be maintained by LJ Management in Neuchatel, Switzerland.

When contacted, Mrinmoy Mukherjee, CEO and director of Sachin Tendulkar Foundation, said: “The referenced investment by Mr Tendulkar has been made by him from his tax paid funds under the Liberalised Remittance Scheme (LRS) and has been duly accounted for and declared in his tax returns.

“You have, in your email, not only recognised the legal uses of offshore companies, but also indicated that the ICIJ’s intention is to look into the use of certain jurisdictions by persons to engage in money laundering, tax evasion and other illicit activities.

He added: “We reiterate that the investment by Mr Tendulkar has been legitimately made through banking channels from India and has been declared to the income tax authorities. Further, the amount of Rs 60 crore as quoted by you is grossly incorrect, but regardless, all amounts received by Mr Tendulkar on liquidation of the investment have also been declared in his tax returns.”

“We would once again request you to ensure that neither The Indian Express nor the ICIJ attributes or alleges any improper or illegal motives to Mr Tendulkar’s legitimate investments,” he added.