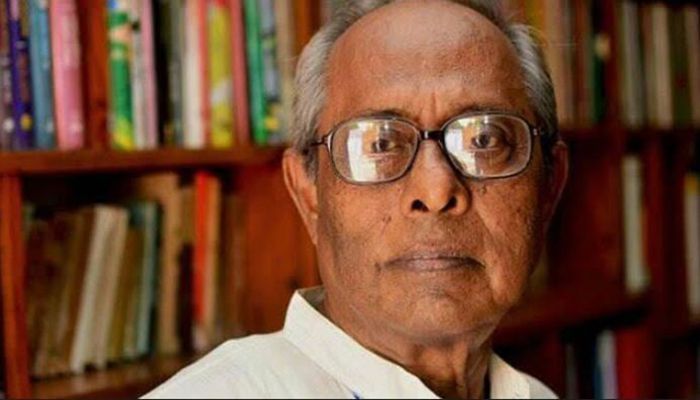 After Zuhr prayers, his namaz-e-janaza was held at RU Central Jame Mosque followed by his burial at in-front of the Central Library largely attended by dignitaries, academics and the public in general.

Prior to the janaza the body was kept at Central Shaheed Minar premises. Scores of people paid their last respect to the legend writer there.

Renowned writer Hasan Azizul Huq passed away in his Bishwabidyaloy Housing Society residence around 9.30 pm on Monday at the age of 83.

He was suffering from various old age complications, including heart, lungs infection and electrolyte imbalance.

He left behind one son, three daughters and a large number of students, academic colleagues, relatives and admirers to mourn his death.

Born at Jabgram village of Burdwan district in India's West Bengal on February 2, 1939, Azizul spent most of his life in Rajshahi.

He retired in 2004 after joining Rajshahi University's philosophy department as a teacher in 1973. He lived near the campus.

Earlier, he obtained B.A. degree from Rajshahi College in 1958 and M.A. degree in Philosophy from RU in 1960. Hasan Azizul Haque was one of the most respected and beloved professors of Rajshahi University, even after his retirement.

Known as one of the authors who marked the changes in Bangla literature in the 60s, Azizul had worked as the Bangabandhu Chair at Dhaka University.

Throughout over 50 years of his remarkable and prestigious literary career, Azizul has published short stories illustrating a uniquely exquisite form of literary language.

Winner of the highest civilian awards, Swadhinata Padak and Ekushey Padak, the writer was honoured with Ananda Puroshkar in West Bengal.

In 2009, Assam University conferred Doctor of Literature degree on Hasan Azizul for his remarkable contribution to Bangla literature.

They also prayed for eternal peace of the departed soul and conveyed deep sympathy to the bereaved family.