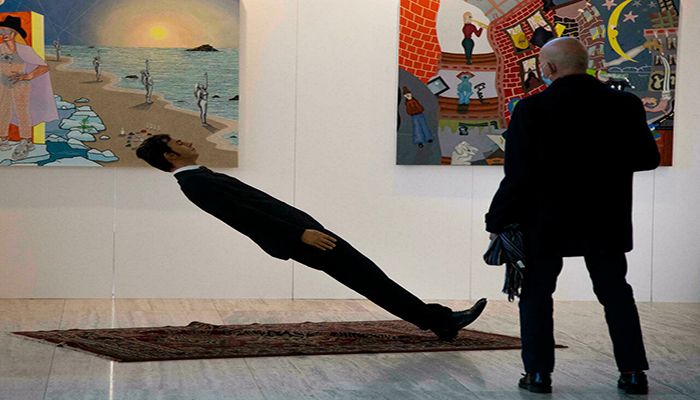 More than 150 galleries presented some 500 artists Friday at the first contemporary art fair in Rome, a city better known for its ruins and works by masters long passed, reports AFP.

"We wanted to fill a void," fair director Alessandro Nicosia told AFP, indirectly acknowledging the absence for many years of a more avant-garde artistic and cultural movement in the Eternal City.

Veteran artists and young talent were represented at the four-day "Arte in Nuvola" exhibition, offering a snapshot of the state of Italian modern art.

Organisers hope the event, which runs until Sunday, will take place annually and become a reference point for gallery owners, collectors and museum directors.

But there was also a foreign presence, from France's Cyril de Commarque to the 17 artists of different backgrounds brought by official guest country Israel.

Commarque, who lives in Rome after years in London and Berlin, said the fair represents a challenge for local artists.

"For a person who grew up in Rome, it is more difficult to abandon classical references, to express yourself in a more contemporary way," he told AFP.

His installation, "The Goddess of All Things", is made of recycled material and shows a huge egg from which a pregnant woman emerges, in a modern allegory of birth.

Russian artist Iakovos Volkov made a map of the world with materials found in rubbish dumps and on the street, including piles of clothes, empty aerosols and stuffed animals.

Another highlight was a huge black iron cube covered with lumps of coal, conceived in the 1970s by Rome-based Greek artist Jannis Kounellis, who died in 2017.