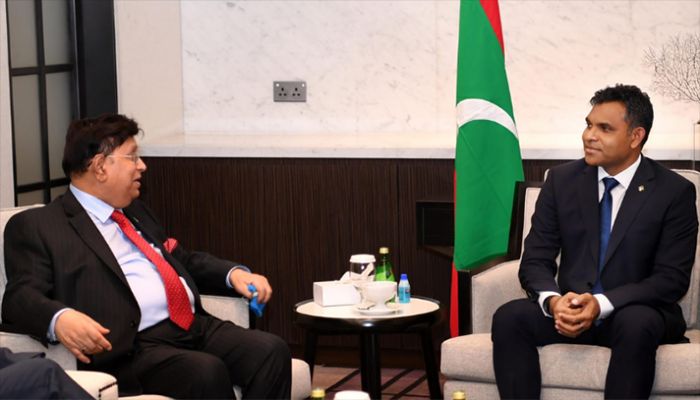 Bangladesh and Maldives have agreed to collaborate on the establishment of a direct shipping line between Chattogram and Malé, as well as the expansion of bilateral trade, reports media.

The two South Asian nations also emphasized the importance of further deepening bilateral relations, According to a press release issued on Tuesday.

Both the countries discussed the ways of broader cooperation when Bangladesh Foreign Minister AK Abdul Momen called on Maldives Vice-President Faisal Naseem at Hotel InterContinental in Dhaka on Monday evening.

The Maldivian vice-president arrived in the capital on Monday for a three-day official visit.

During the meeting, both the leaders reviewed the entire spectrum of bilateral relations and exchanged views on regional and international issues.

The foreign minister mentioned Bangladeshi expatriate workers in Maldives are diligently contributing to the host economy while the Maldives side expressed keen interest to recruit specialised professionals and medical doctors from Bangladesh.

Momen said that Bangladesh attaches high importance to Maldives which are rooted in shared religion, culture and values.

He thanked the government of Maldives for the gift of 2,00,000 doses of Covid-19 vaccine for the people of Bangladesh, read the release.

In the meeting, Faisal Naseem was accompanied by among others, two cabinet ministers and foreign secretary of Maldives while Momen was accompanied by Foreign Secretary Ambassador Masud Bin Momen and other senior officials of the Ministry of Foreign Affairs.

Earlier, the Maldivian vice-president paid homage to the memories of Father of the Nation Bangabandhu Sheikh Mujibur Rahman at Bangabandhu Memorial Museum in the capital’s Dhanmondi with a floral wreath.

He is expected to meet President Md Abdul Hamid and a few cabinet ministers during the visit.