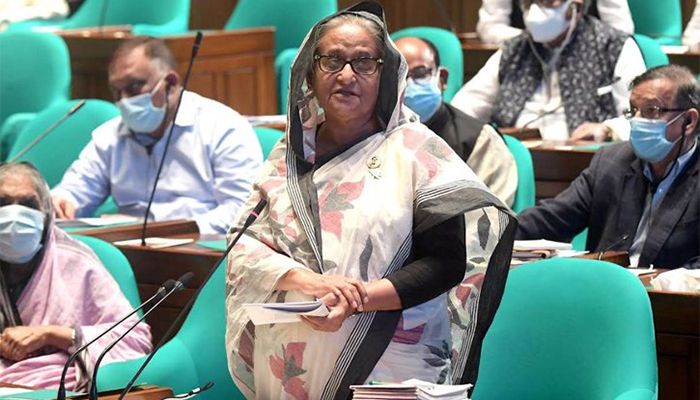 ﻿Prime Minister Sheikh Hasina today placed a proposal in the Jatiya Sangsad (JS) to hold a special discussion on the occasion of the Golden Jubilee of the country's independence, pledging to take Bangladesh to a dignified position by building it as a developed and prosperous country.

"In this historic moment of observing the golden jubilee of the country’s independence, our commitment will be to take Bangladesh to a dignified position on the world stage by transforming it into a “Sonar Bangla” free from poverty and hunger, repression and discrimination, and a developed and prosperous country, overcoming all the challenges, as envisioned by Father of the Nation Bangabandhu Sheikh Mujibur Rahman," she said.

The Leader of the House moved the proposal under Section 147 of the Rules of Procedures in the 15th session of the 11th parliament.

At the beginning of the day's sitting, President Abdul Hamid gave a commemorative speech marking the golden jubilee of the country's independence.

In the proposal, the Prime Minister said, “The parliament opines that the golden jubilee celebration of the country’s independence in 2021is a glorious chapter in the national life of the Bangalees. Bangladesh is marching forward at irresistible speed. Bangladesh now appears as a “development miracle” in the whole world arena.”

She told the parliament that that the country’s independence was achieved following the path of the Language Movement from 1948 to 1952, six-point of 1966, mass uprising of 69 under the leadership of the all-time best Bangalee and Father of the Nation Bangabandhu Sheikh Mujibur Rahman, his historic March 7 speech, March 25 genocide, declaration of the independence by Bangabandhu in the early hours of March 26, formation of the Mujibnagar government on April 17 and the sacrifice of 3 million of martyrs and 200,000 mothers and sisters.

The Prime Minister said that the final victory was achieved on December 16, 1971 with the surrender of the Pakistani army.