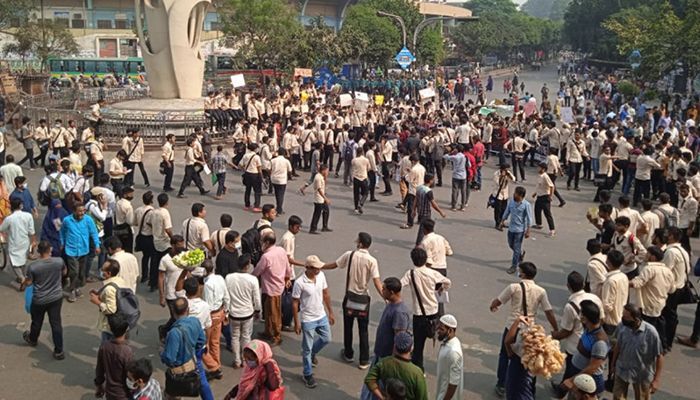 ﻿Students took to the streets again on Thursday to demand speedy trials of those involved in the death of the Notre Dame College student who died after the DSCC garbage-carrying truck hit him at Gulistan.

Outraged students marched in front of Notre Dame College around 11am on Thursday (November 25). The procession went to Shapla Chattar and stayed for a while. Later, the students left for Gulistan.

During this time, they were seen chanting slogans like 'My brother is in the grave, why the murderer is out', 'we want justice' etc.

Protesters said they would take to the streets in Gulistan to demand justice for the death of their classmate. "We will continue our sit-in program until justice is done."

Naim Hasan, a 17-year-student of Notre Dame College, was killed when a garbage truck of Dhaka South City Corporation (DSCC) hit him at Golchattar in the city’s Gulistan area on Wednesday. The driver of the DSCC vehicle was arrested and the vehicle was seized in the incident, said Officer-in-Charge (OC) of Paltan Police Station Salauddin Mia.

A case has been filed against the driver. The plaintiff in the case is the father of the deceased Shah Alam.