Bangladesh And Bulgaria to Strengthen Partnership 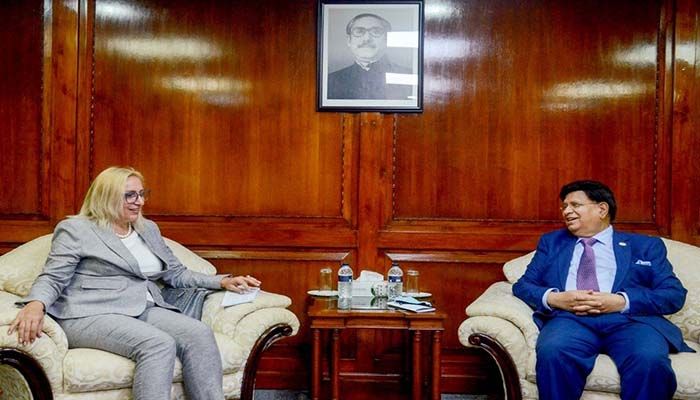 Bangladesh and Bulgaria will be celebrating the 50th anniversary of the establishment of diplomatic relations between the two friendly countries this year, reports media.

On this historic occasion, Bangladesh and Bulgaria have decided to take up a number of initiatives to further strengthen bilateral partnership. Bulgarian Ambassador Eleonora Dimitrova called on Foreign Minister AK Abdul Momen at the Ministry of Foreign Affairs on Wednesday (May 11) to discuss about the initiatives and other issues of common interest.

Foreign Minister and the Bulgarian Ambassador recalled the official visit of Prime Minister Sheikh Hasina to Sofia in May 2016 to attend the Global Women Leader’s Forum and her meetings with the President and Prime Minister of Bulgaria.

The proposal of naming a street in Sofia after the Father of the Nation Bangabandhu Sheikh Mujibur Rahman and a road in Dhaka after the forefather of the Bulgarian National Revival, St. Paisiy Hilendarski has been discussed and both side agreed, in principle, to work on that.

Foreign Minister Momen appreciated Bulgarian support in various regional and in international forum and sought their support for Bangladesh’s candidature to the United Nations Human Rights Council for the term 2023-25.

Foreign Minister Momen emphasized on regular exchange of business delegation between the two countries and highlighting the excellent opportunities in Bangladesh, he requested the Ambassador of Bulgaria to encourage Bulgarian investors to invest in Bangladesh. Bulgarian Ambassador requested that Bangladesh can consider importing edible oil (sunflower oil), corn, etc. from Bulgaria.